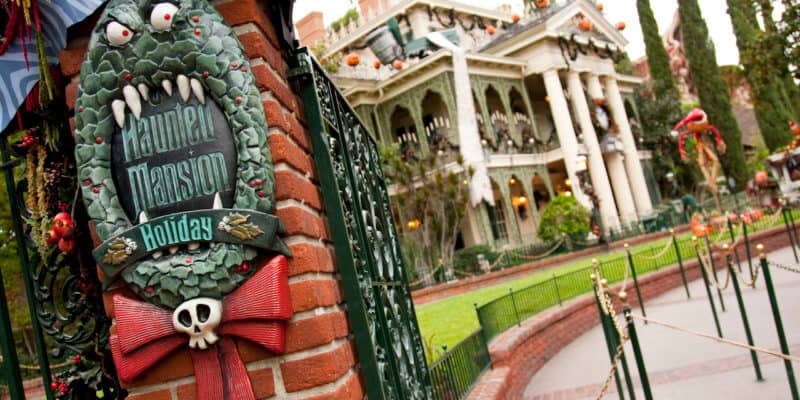 Each year, as the time for flickering candles, grim grinning ghosts and Halloween draws near, Guests marvel at a spooky event takes place at the Disneyland Resort in California. This year is even more special as the Haunted Mansion attraction is celebrating its 50th anniversary.

The stretching room seems eerily festive. The portraits, however, remain as creepy and cryptic as ever. And Madame Leota’s crystal ball is even more ominous, as the incantations she speaks are changed to fit the new holiday overlay. Even the Cast Members in the mansion get into the haunted holiday spirit.

The Haunted Mansion Holiday attraction is inspired by Tim Burton’s The Nightmare Before Christmas. You know—the wickedly dark stop-motion feature in which Jack Skellington, the Pumpkin King of Halloweentown, sets out for something new, as he has become bored with the annual mundane practice of scaring people in the real world. He stumbles upon Christmastown and wonders, “What’s this?” as he navigates the many symbols, traditions, and decorations that define the winter holiday.

He initially intends to take over Christmas by kidnapping Old St. Nick, or as Jack calls him, “Sandy Claws,” but his plans are foiled, as the spooky Jack has a change of heart (or bones—does Jack have an actual heart?).

The Nightmare Before Christmas merges the celebrations of Halloween and Christmas, a concept that was initially inspired by the same clash of the holidays that takes place in the retail market all the world over. But that clash is cause for celebration at the Haunted Mansion attraction this time of year.

The creepy old mansion that houses Madame Leota, Constance Hatchaway and 997 other happy haunts comes to dazzling life with holiday-themed decorations, lively music, hitchhiking ghosts and even visits from the characters from The Nightmare Before Christmas, like Jack Skellington, Sally and Oogie Boogie.

Irvine gives D23 fans the background of the pet graveyard, as well as an inside look at the biggest nightmare of the holiday season as she shares insight, little known facts and secrets of the transformation that gives each ghost in the mansion an even more ghostly glow. The transformation is spectacular, and the work that goes into it is absolutely magical.

Have you experienced Haunted Mansion Holiday at Disneyland? Tell us about the best part of the experience in the comments section below.

Comments Off on Watch the Haunted Mansion Holiday transformation at Disneyland