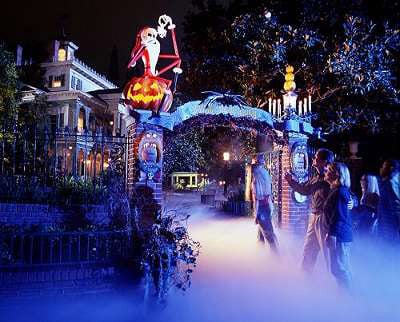 ‘Twas a long time ago (longer now than it seems),
In a place that, perhaps, you have seen in your dreams.
For the story that you are about to be told
Began in the holiday worlds of old.
I know you’re curious to see what’s inside.
It’s what happens when two holidays collide!

Haunted Mansion Holiday premiered at Disneyland in fall 2001. The idea for a holiday overlay on Haunted Mansion came to be after the success of other holiday overlays (it’s a small world and Country Bear Jamboree already had successful fan-favorite holiday overlays at the time). And since Tim Burton already brought to life the merging of Halloween and Christmas with “Nightmare Before Christmas,” it only made sense to produce a ride overlay that could last through the Halloween and Holiday seasons at Disneyland Resort. 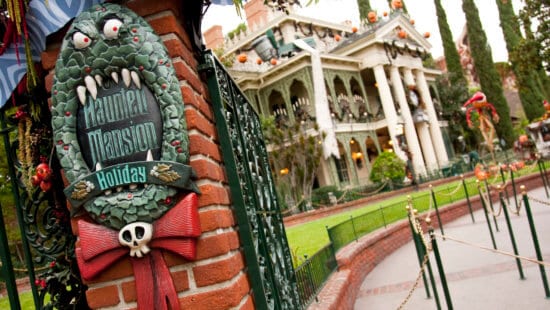 Creative Director Steven Davison (who is also credited with the inspiration for World of Color, Fantasmic!, and it’s a small world Holiday, among other attractions at Disneyland Resort) conceived the idea to rewrite the famous holiday poem “Twas the Night Before Christmas” for the attraction. The poem was then rewritten to fit the Halloween-Christmas combination and “Nightmare Before Christmas” overlay of the ride to help Imagineers come up with the features of each room of the Haunted Mansion. After getting Tim Burton’s approval, the overlay construction began and the rest is history.

But although Haunted Mansion Holiday has always lasted through these two seasons at Disneyland Resort, it used to be more of a limited-time experience than it is today. The attraction first premiered at the beginning of October in 2001, yet now it opens annually with the start of Halloween Time at Disneyland, which, this year, began on September 7. In 2018, Haunted Mansion Holiday will last from the beginning of September through the end of the Holiday season on January 6, making the attraction available for guests to experience for approximately one-third of the year. 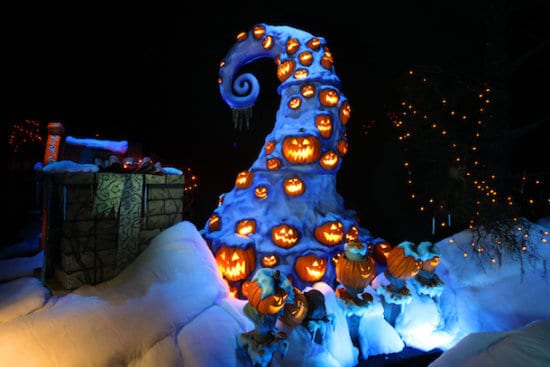 Haunted Mansion closes every year for approximately three weeks in August to allow cast members to add the “Nightmare Before Christmas” overlay to the ride. New animatronics, decorations, sounds, and effects are added throughout the ride, turning it into almost an entirely new attraction. This extensive overlay process allows guests to enjoy the attraction throughout the Halloween and Holiday seasons at Disneyland Resort. Some “Nightmare Before Christmas” fans consider the movie a celebration of Halloween, while others believe it is more of a Christmas story, so why not keep the ride overlay up and running through both seasons?

Both the exterior and the interior of the Haunted Mansion are reimagined during the production of Haunted Mansion Holiday. Every night, over 400 flickering candles and over 100 jack-o-lanterns illuminate the outside grounds of the mansion, giving it an inviting and mesmerizing glow. Inside, familiar scenes within the stretching room and the portrait gallery are given a “Nightmare Before Christmas” twist. Most notably, perhaps, is the animated Jack Skellington and Zero sequence that hauntingly appears on the stretching room’s ceiling, spooking guests year after year.

And it isn’t only Halloween touches that are given to this attraction. Cast members craft wintery scenes throughout the ride using thousands of feet of “Black Gnarly” Christmas garland, graveyard ice angels, and over 7,500 square feet of snow. The artistic combination of Halloween and Christmas is immersive and allows guests to feel transported into the “Nightmare Before Christmas” film.

Several characters represented in Haunted Mansion Holiday are voiced by the original actors from Tim Burton’s “Nightmare Before Christmas” film. A new soundtrack was added to the overlay during the second year of its opening. This new soundtrack made the ride much more immersive, as it included music based on the film’s score. 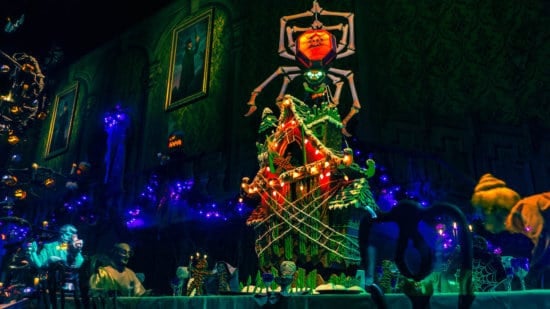 One of the most dazzling and awe-inspiring features of the holiday attraction is the handmade gingerbread house. The gingerbread house has been a prominent feature of the Haunted Mansion Holiday since the attraction overlay’s debut in 2001. Multiple pastry chefs work together every year to construct the gingerbread house, many of whom have been a part of the tradition since its conception in 2001. Each house takes an average of 16 days to complete and includes a combination of gingerbread, powdered sugar, egg whites, lemon juice, fondant, and glitter.

In 2003, Oogie Boogie, the main antagonist from the Tim Burton film, was added as an animatronic to the Haunted Mansion Holiday attraction. Since then, guests can see Oogie as their doom buggy ride is coming to an end. The impressive (and rather massive) Oogie Boogie animatronic takes the place of the Hitchhiking Ghosts at the end of the attraction, providing guests with gifts (instead of ghosts) from his “Holiday Tricks and Treats” wheel. The illuminated and frightfully fun animatronic is a nod to the film’s plot, as he is dressed up as Oogie Santa Clause like in “Nightmare Before Christmas.” His voice, movement, and size make Oogie possible one of the best animatronics in the entire attraction and definitely one to look out for.

Haunted Mansion Holiday gained a special new animatronic in 2016 with the addition of Sally, Jack Skellington’s beloved from the “Nightmare Before Christmas” film. Until Sally was added to the popular dark ride two years ago, there always seemed to be an element missing. After all, what is Jack without Sally? Before this large animatronic Sally was added in 2016, a smaller version (which is still present today) waved guests goodbye as they exited the ride. This was added in 2013 in place of the Black Widow Bride Constance Hatchaway, who asks guests to “Hurry Back” during the non-holiday version of the Haunted Mansion attraction.

Now, guests can pay a visit to a larger, more lifelike version of the charming character every year in the graveyard scene of Haunted Mansion Holiday. If you pay close attention, you may catch who Sally is staring at longingly! 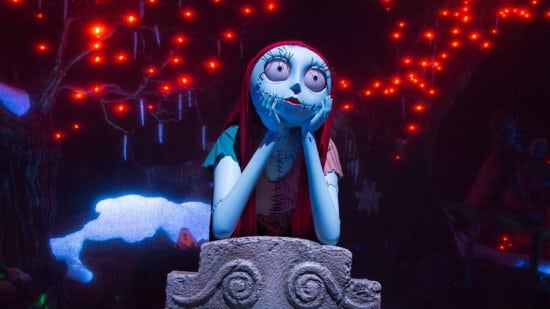 Comments Off on When Two Holidays Collide: Frightfully Fun Facts and History of Haunted Mansion Holiday at Disneyland