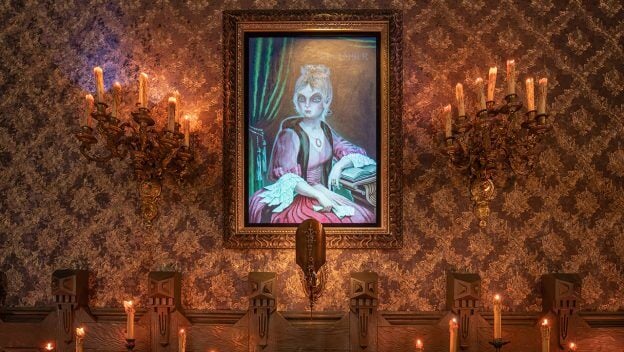 Welcome, foolish mortals, to the Haunted Mansion. I am your host, your ghost host. Kindly step all the way in please, and make room for everyone.

Haunted Mansion is a favorite attraction at Disneyland Resort. From the graveyard to the stretching room to, of course, the famous ballroom scene, the details and illusions within this attraction are just incredible.

But once Disneyland Park reopens to California residents later this month, the attraction will look a bit different.

The Haunted Mansion is a popular attraction located in both Magic Kingdom at Walt Disney World and Disneyland Park in Disneyland Resort. The popular dark ride takes Guests through a mansion of haunted characters while riding aboard a Doom Buggy.

It looks as though the ghosts at Disneyland’s Haunted Mansion have been hard at work while the theme parks remained closed as Guests may notice some updated elements at the attraction.

Disney Parks Blog just shared some exciting details about the refurbishment, explaining what Guests can expect to see. First, upon arrival, Guests will notice fresh landscaping as a new site for dearly departed pets has been built:

Upon your return to the Haunted Mansion at Disneyland park, you may discover the ghosts have been busy updating a few elements in and around the estate…

Outside, freshly landscaped details now adorn the site for dearly departed pets, representing their stories from beyond the grave.

Disney Parks Blog also shared that Guests should keep an eye out for new embellishments along the portrait hallway scene of the ride, including an old, but familiar face!

The video below highlights some of the happy haunts’ handiwork:

Disney’s Michele Hobbs, who managed the Haunted Mansion refurbishment, shared some information regarding the “April to December” painting. The Los Angeles Times reports:

Here, resurrected, is a portrait from Davis, the Disney legend who designed such characters as Snow White, Tinker Bell and Maleficent, as well as the creative force behind the look of many of the animation-inspired vignettes of the park’s foundational rides. Davis’ “April to December” painting, in which a gorgeous woman slowly transforms into jagged bones and aged flesh, was removed from the Haunted Mansion’s portrait hallway at Disneyland in the mid-2000s.

Hobbs says that at the time, the painting’s gradual four-scene change didn’t work with a technological update to the ride, which created crisper, more instantaneous two-slide transformations. Imagineering has now extended the portrait hallway, placing a remade version of Davis’ art around a bend — past the illusion of the busts watching guests.

Additionally, the Los Angeles Times shared that there is also a nod to one of Disney’s famed animators and theme park architects, Xavier Atencio, as a new cat statue has been added to the ride:

This fiendish feline was envisioned at one point by Atencio to follow guests throughout the ride, a creature said to despise living humans, and whose predatory instincts were of the possession kind.

In Atencio’s concept art, the cat was devilish in presentation, with elongated vampire-like fangs and a piercing red eye. In a nod to Edgar Allan Poe’s story “The Black Cat,” it had just one eyeball, which sat in its socket with all the subtlety of a fire alarm. Sometimes we’d see the cat as simply an eye in the darkness; other times, there would be allusions that this phantom was on the prowl for a spirit to possess. Discarded eventually — a raven essentially fills a similar role — the cat, which will now be represented as an elegant statue, stands as a reminder that the Haunted Mansion was once envisioned more tensely as a walk between the hair-raising and the humorous.

And lastly, Disney Parks even shared a video of the “new chills and wall-to-wall creeps” at the original Haunted Mansion in New Orleans Square at Disneyland:

It is important to note that when the parks reopen, some amenities — including FASTPASS, Disney MaxPass, Magic Mornings, and Extra Magic Hour offerings — will be suspended as part of the phased reopening efforts amid the pandemic.

Additionally, select attractions and certain experiences that draw crowds, including parades and nighttime spectaculars, will also return at a later date.

Are you excited to ride Haunted Mansion when it reopens later this month along with Disneyland Park? Let us know in the comments below.

If you want to visit Disneyland on your next family vacation, but aren’t sure where to begin planning, then don’t hesitate to reach out to our friends over at the Authorized Disney Vacation Planners at Academy Travel for a free quote.