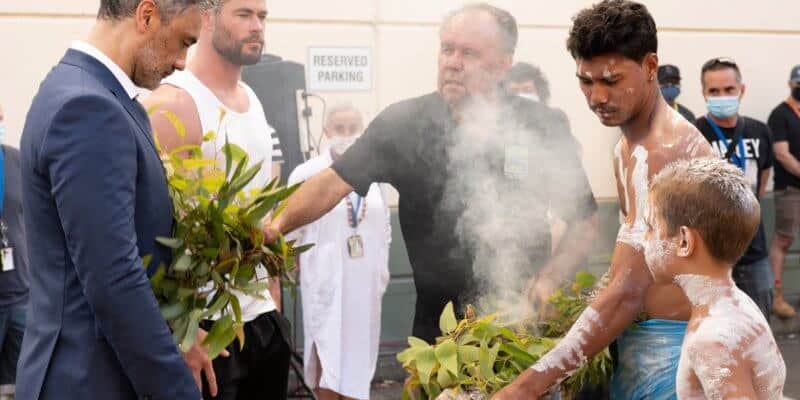 As if you needed another reason to love Taika Waititi and Chris Hemsworth, Waititi took to his Twitter to share how he and Chris Hemsworth connected with culture before they began filming for the latest Thor film, Thor: Love and Thunder.

Thor: Love and Thunder will be the fourth movie in the Thor franchise — and the second directed by Taika Waititi. Waititi will also be directing a new Star Wars movie, though that does not yet have a release date.

Here is what Taika Waititi had to say about his cultural experience before shooting Thor: Love and Thunder. He also encouraged other filmmakers in his post:

Started Love & Thunder with Welcome to Country ceremony from Gamay dancers of Gadigal & Bidiagal Nation and karakia from Te Aranganui. I encourage all film makers to engage with 1st nations peoples whenever shooting your films. It’s worth it and it’s the right thing to do.

Started Love & Thunder with Welcome to Country ceremony from Gamay dancers of Gadigal & Bidiagal Nation and karakia from Te Aranganui. I encourage all film makers to engage with 1st nations peoples whenever shooting your films. It's worth it and it's the right thing to do.??❤️ pic.twitter.com/Rhhvt2zFNE

We love seeing these incredible photos — thank you for sharing this insight, Taika!

There is not a lot of storyline information for this new movie; however, we do know that Christian Bale will be taking the role of Gorr The Butcher. So, at least we have an antagonist for Thor: Love and Thunder! Additionally, it’s been reported that Natalie Portman’s return in this next Thor film will lead her to become Lady Thor. It appears that there is a lot for Marvel Studios fans to look forward to in this movie when it debuts on May 6, 2022.

Personally, I cannot wait to see this film as I really enjoy the direction that Taiki Waititi is taking the Thor franchise! Thor: Ragnarok is one of my favorite Marvel movies in the MCU so it is great to see Waititi back at the helm of another chapter of the Thor storyline.

What do you think about Taika Waititi’s Twitter post about the importance of connecting with a nation’s culture while filming on-location in another country? Let us know in the comments.

Comments Off on Taika Waititi, Chris Hemsworth Connect With Culture Before Filming ‘Thor’