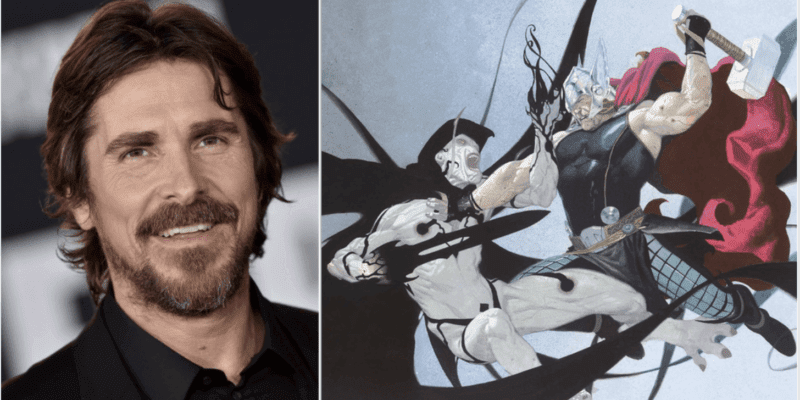 Although Thor: Love and Thunder isn’t set to release until May 6, 2022, fans are already looking forward to the fourth installment in Marvel Studios’ Thor franchise, which has also included Thor (2011), Thor: The Dark World (2013), and Thor: Ragnarok (2017).

Chris Hemsworth — who plays the title character — and Natalie Portman — who plays Jane Foster — are both set to reprise their roles in Thor: Love and Thunder. Hemsworth has, of course, also appeared in various other Marvel Avengers films as Thor Odinson.

Today, at Disney’s 2020 Investors Day event, another Thor: Love and Thunder character was officially confirmed. Although there had already been rumors that Christian Bale would be playing the villain in the upcoming MCU movie, Disney and Marvel executives confirmed the news today, with additional details.

Academy Award-winning actor Christian Bale will join the cast of Thor: Love and Thunder as the villain Gorr the God Butcher. In theaters May 6, 2022.

Academy Award-winning actor Christian Bale will join the cast of Thor: Love and Thunder as the villain Gorr the God Butcher. In theaters May 6, 2022. ⚡ pic.twitter.com/kByHkyJp6o

The Marvel Fandom Wiki shares these details about Gorr got his name, “The God Butcher,” in Stan Lee’s Marvel comic books:

Gorr used his new weapon, All-Black the Necrosword, to kill the gold-armored god; then vowed to seek vengeance against all gods for never answering his prayers, and set out to kill them all.[7][8] Gorr despised any god and travelled the cosmos for thousands of years to exact his revenge, embarking on a deicidal crusade in which he allegedly killed many gods of fear, war, chaos, genocide, revenge, plagues, earthquakes, blood, wrath, jealousy, death, degradation, and a few gods of poetry and flowers.[9]

Are you looking forward to seeing Christian Bale as the bad guy in Thor: Love and Thunder?