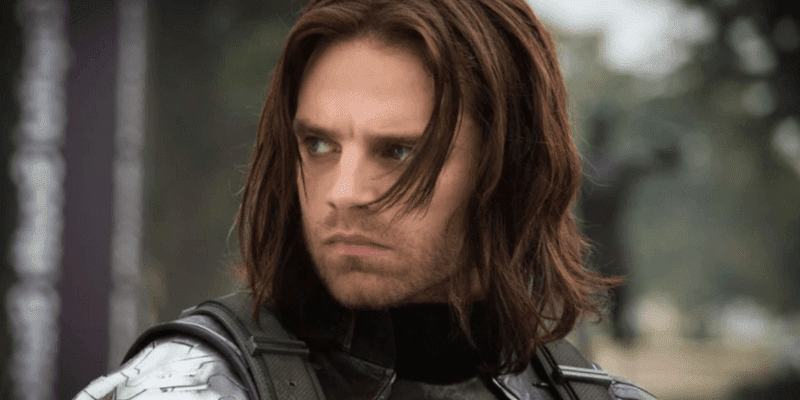 Undoubtedly one of the most mysterious, complex characters in the Marvel Cinematic Universe is Bucky Barnes/Winter Soldier — he holds a rich history that most Marvel fans are unaware of. Appearing in numerous Marvel movies and the highly-acclaimed Disney+ series The Falcon and the Winter Soldier, Bucky Barnes is one of the most prominent Marvel characters that barely anyone knows much about.
It’s easy to get confused with Bucky’s complex history, so we’ve created a complete guide to learn who Bucky Barnes is in the MCU.

How Bucky Barnes is Introduced

Sergeant James Buchanan “Bucky” Barnes (Sebastian Stan) makes his official Marvel Cinematic Universe debut in Captain America: The First Avenger (2011). Starring alongside Steve Rogers/Captain America (Chris Evans), Bucky is the older brother figure in Steve’s early adulthood and later joins his best friend’s side in World War II. Despite his immense physical and social skills compared to the pre-Captain America Steve Rogers, Bucky Barnes takes his childhood friend under his wing (soon to be a metal wing) and vows to be by his side until “the end of the line.”

In Captain America: The First Avenger, the audience first sees Bucky Barnes defending a feeble Steve Rogers in a Brooklyn Alley from a local punk. Despite Steve’s inabilities, Bucky never judges his friend and continues to support him as Rogers attempts to enlist in the U.S. Army and join his friend across seas.

Though we’re not explicitly told when Bucky and Steve first met, it’s assumed they have been close friends since childhood. Bucky was at Steve’s side when his parents, unfortunately, passed away — going as far as to invite his lonely companion to live with him in Brooklyn.

How does the movie introduction of Bucky differ from the comic book version?

In Marvel comics, James “Bucky” Barnes (aka Winter Soldier) is an American World War II Soldier turned Soviet spy and assassin. After first being recruited to the U.S. Army during World War II after being a ward of the state, Bucky was sent overseas to England. There, he received hand-to-hand combat training and received select assignments as a military operative.

Bucky Barnes and Steve Rogers do not officially meet until Barnes is assigned to accompany the new U.S. Government operative Rogers in a secret mission against Red Skull. Initially unaware of Steve’s “Captain America” identity and his work’s true nature, the two become close friends and help free hundreds of Nazi prisoners. Vowing to keep Steve Rogers’ secret identity a secret, the two soldiers begin to mentor one another and form a Batman and Robin-like relationship.

In Captain America: The First Avenger, while attempting to capture Arnim Zola with Steve Rogers and the Howling Commandos, Bucky Barnes plummets into the Austrian Alps after getting caught in HYDRA’s ambush.

As no body was recovered, Barnes was declared deceased, but officially listed as Missing in Action (MIA).

Unknown to Captain America and the United States, James was captured by the Soviet Union and HYRDA. Zola’s experiments on Barnes allowed him to survive the deadly fall, but he lost his left arm in the process. Declared dead, Barnes was the ultimate test subject for HYDRA. Subsequently, further experiments were conducted on Barnes. Gaining superhuman abilities and put into a cryogenic stasis to ensure longevity, Barnes survived over seven decades while barely aging.

Over 70 years later, Steve Rogers and Bucky Barnes are finally reunited, but this time is his enemy. Brainwashed and unable to recognize his best friend, the Winter Soldier uncontrollably attempts to kill Captain America, Black Widow (Scarlett Johansson), and Falcon (Anthony Mackie).

How did Bucky end up in Wakanda?

T’Challa placed Barnes in cryostasis until all of HYDRA’s control triggers could be removed from his mind. Afterward, Bucky lives peacefully in Wakanda until Avengers: Infinity War (2018).

While a prisoner of war used in Arnim Zola’s attempts to recreate the Super Soldier Serum, Barnes received an alternate formula. With no apparent effects upon rescue by Steve Rogers, Barnes’ super-human abilities slowly progressed and allowed him to service the fall into the icy Austrian Alps.

On top of that, he has a cybernetic arm. After HYRDA recovered an injured Barnes, they replaced his left arm with a prosthetic, robotic arm with the strength to smash through concrete. In Captain America: The Winter Soldier, Bucky nearly kills Steve Rogers with his cybernetic arm — topping the Avenger in physical strength.

He’s basically a bionic Captain America. All he needs is Cap’s shield.

Before The Falcon and the Winter Soldier premiered on Disney+, Bucky Barnes was last seen in Avengers: Endgame (2019).

Surviving the “Blip” and returning to Captain America’s side for the final battle against Thanos, Barnes becomes an Avenger and fends off mass forces of alien enemies.

Sharing a final, episodic scene with Captain America, Bucky sees the famous shield passed to his fellow Avenger Sam Wilson/Falcon after the Battle for Earth. After that, Bucky was not seen in any further Marvel productions for two years.

What does the future hold for Bucky Barnes?

Given the opportunity to further explore his complex character, Sebastian Stan and Anthony Mackie are ready for Marvel fans to see The Falcon and the Winter Soldier.

Premiering on March 19, 2021, on Disney+, the six-episode mini-series follows the events after Avengers: Endgame and sees this comedic duo face a new enemy: the Flagsmashers. Bucky Barnes’ future is bright with Marvel, as Phase 4 officially kicked off with WandaVision and Falcon and the Winter Soldier will directly lead into a feature film.

Are you a Bucky Barnes fan? Tell us what your favorite Bucky moment is in the comments!

Comments Off on Who Is Bucky Barnes In the Marvel Cinematic Universe?