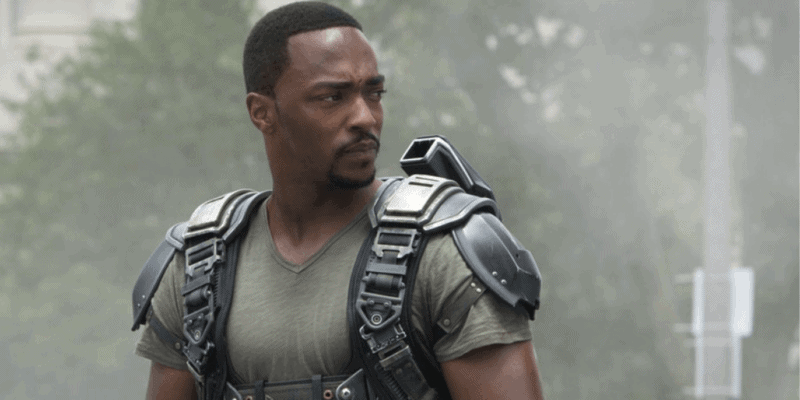 As Marvel fans are still coming down from all of the curveballs thrown at them in WandaVision — Kevin Feige and Co.’s ode to classic TV sitcoms that featured Elizabeth Olsen (Scarlet Witch/Wanda Maximoff) and Paul Bettany (Vision) — there’s a completely different kind of Marvel series just around the bend.

In a mere four days, The Falcon and the Winter Soldier will make its Disney+ debut, and it’s action-packed from the very first second.

Starring Avengers franchise alums Anthony Mackie as Sam Wilson/Falcon and Sebastian Stan as Bucky Barnes/Winter Soldier, the series picks up soon after the events of Avengers: Endgame (2019), with the Blip still heavily on everyone’s minds.

Walt Disney Company CEO Bob Chapek recently promised Marvel fans that The Falcon and the Winter Soldier would be a “cinematic experience” and, boy, does it deliver. From the first scene, it’s more like a Marvel movie than a television series. Viewers can almost imagine they’re sitting in a room with Dolby digital surround sound and stadium seating instead of on their living room couches (we know, we miss movie theaters, too).

One of the biggest reasons for this is the character development that can be seen even in just the premiere episode of the new Marvel Cinematic Universe show. Sam, in particular, begins to grapple with his new reality, specifically regarding his it feels to be a Black man in possession of Captain America’s shield.

Boba Fett-loving Mackie recently said, according to a press release from Disney:

“Sam considers the shield a representation of the country that we live in. There’s a lot of trepidation as far as how does a Black man represent a country that does not represent him? When you think of Captain America, you think of a very specific brand of person. And there are so many different lines, so many different avenues, so many realities that we have to live in every day to be a successful Black man in our society. Sometimes it’s just too hard to deal with all of those courtships of success. You can’t be the same person in every room you walk in because every person you meet expects a different person. For somebody like Sam, he has to ask himself the question if that’s something he’s willing to deal with.”

“For me, what made the handoff of the shield give you chill bumps and made it so compelling was the simplicity of it. The single line from Sam when Steve [Steve Rogers played by Chris Evans] asks him how it feels. ‘Like it belongs to someone else.’ When he said that, he’s obviously in a state of crisis. That scene did everything it needed to do to prop him up for the series and lock in that central conflict.”

In addition to exploring Sam’s feelings about what exactly Cap’s shield — and, to that end, possibly being Captain America — represents as a Black man in the modern United States, the first episode of the MCU original series sets up some shocking (potential) twists and turns for the next five episodes of the upcoming series‘ six-episode run.

Remember, you can catch up on everything MCU — including Avengers: Age of Ultron, Captain America: Civil War, Black Panther featuring the late Chadwick Boseman Avengers: Infinity War, and the new series Marvel Legends — on Disney+ before The Falcon and the Winter Soldier premieres. The official description of the Marvel Phase 4 series reads:

Are you eager to see Marvel actor Anthony Mackie explore Sam Wilson’s race in relation to being the new Captain America? Let us know your thoughts on what Mackie shared as the Marvel universe moves forward.

Comments Off on Anthony Mackie: Captain America Is a “Specific Brand of Person”