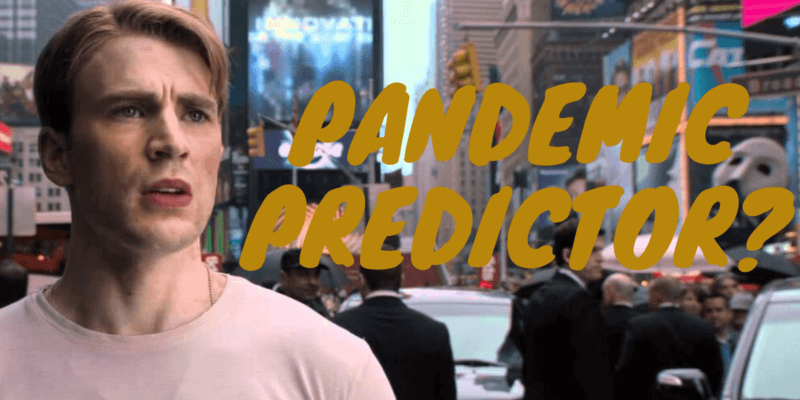 If you’re a Marvel fan and a conspiracy theorist, then boy have we got a good one for you.

A screenshot from Captain America: The First Avenger has set Twitter aflame as it allegedly predicts not only the coronavirus pandemic, but other big world events like the Hong Kong protests.

Some fans are now making the claim that Disney and Marvel are part of a ‘new world order’ which planned to release the coronavirus outbreak nine years after the film. Which is … a lot.

While Covid-19 conspiracies are rife, we’ll let you decide on this one, though really, ‘eerie coincidence’ is the only feasible conclusion.

The Captain America: The First Avenger screenshot which foreshadows the Coronavirus crisis

If your Marvel Cinematic Universe knowledge is rusty, let me remind you where we’re at. In the closing scene of the first Captain America film, Steve Rogers wakes up in the modern-day (2011), and runs into a completely unfamiliar Times Square.

My last post on it… I just had to. Clips from last years captain America. Corona. Virus. Mask. And HSBC bank owned by Hong Kong.

By George… they did it! Laters all ?#QAnon pic.twitter.com/vm1WboIGDl

He’s surrounded by flashing billboards and hundreds of people wearing unfamiliar clothes. Though your eyes were likely fixed on the dreamy Captain America, taking a look behind him does reveal some creepy coincidences.

We glimpse Corona beer next to his right shoulder, while another billboard shows what looks startlingly like the scientific representation of novel coronavirus.

We also see a mask (something controversially used to combat the infectious disease) as well as a billboard for the Hong Kong-owned bank HSBC.

Did the first Captain America movie intentionally predict the coronavirus?

Well, no. I’m afraid not my dear internet sleuth, we highly doubt that Marvel is interested in spreading any disease. Plus, just like every other conspiracy theory ever, why would they give away such vital information if this were actually true?

What is interesting is just what the heck that ‘virus billboard‘ actually is. Twitter user and film critic William Mullally took a lot of time to dig into where exactly the billboard comes from and if you want the full thread, you can read each individual tweet, but the bottom line is…

This conspiracy theory actually picked up so much steam that Barilla responded with the following statement to myth-busting website Snopes;

‘This is definitely not the type of question we normally find ourselves in the position of being asked … Any potential reference to the current global pandemic we find ourselves in would be purely coincidental. If the Marvel Universe is able to predict the future, I sure hope I don’t come across any evil demigods who are intent on decimating the planet and the universe.’

What a crazy world we live in that a spaghetti company is tweeting about the final scene of a nine-year-old Marvel movie during the middle of a worldwide pandemic.

What do you think about the Captain America coronavirus conspiracy theory? Is Kevin Feige secretly pulling the global strings while stroking his white cat and cackling about a new world order? Or are the corona billboards mere coincidence? Let us know in the comments below.

Comments Off on Fans Think ‘Captain America’ Predicted the Pandemic