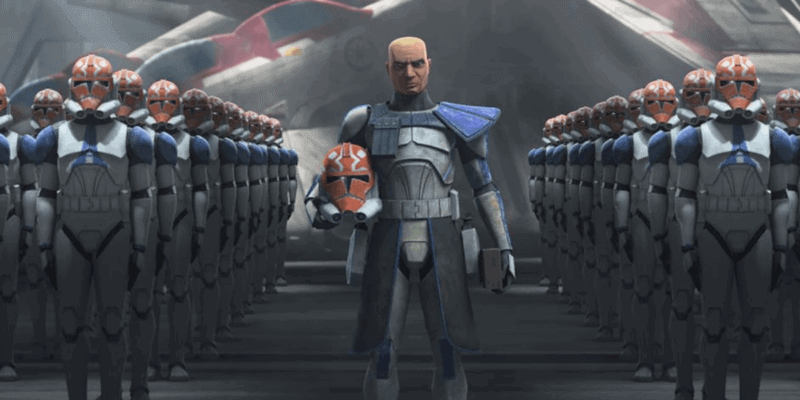 Captain Rex appears in the official Bad Batch trailer released on March 30, 2021 for only a brief moment, but the appearance confirms that the Clone Captain will have a role with Clone Force 99 in the upcoming series. What could Captain Rex’s return to Star Wars in the Disney+ original series The Bad Batch tell us about the fate of other fan favorites from Star Wars: The Clone Wars and Star Wars Rebels?

Who is Captain Rex?

Rex is a seasoned Clone Captain and was the veteran leader of the famed 501st Legion, an elite military squad for the Grand Army of the Republic during the Clone Wars. In the series Star Wars: The Clone Wars, Captain Rex was the deputy to Anakin Skywalker, serving as second-in-command to the Jedi General. Sharing many of Skywalker’s bold, risk-taking traits, the two worked closely together, with Rex also forming a close bond to Anakin’s apprentice Ashoka Tano. He often worked alongside Commander Cody and Jedi General Obi-Wan Kenobi during this time as well.

When Emperor Palpatine invoked Order 66 with Anakin now leading that charge as Sith Lord Darth Vader, the clone army turned on their Jedi leadership slaughtering thousands and driving the Jedi Order to near extinction. Even though the Clones respected and revered their Jedi compatriots, their inhibitor chips, implanted from the moment of their creation, compelled them to follow Palpatine’s orders.

What Happened to Rex After The Clone Wars?

When we meet Captain Rex in Star Wars: Rebels Season 2 he is living on planet Seelos. He is discovered by the Spectres living with his Clone brethren Wolffe and Gregor. The Ghost team had been dispatched by Ashoka Tano. Rex reveals to Ezra Bridger that he and his brothers chose to remove their inhibitor chips in order to disobey Order 66. Once audiences saw Star Wars: The Clone Wars Season 7, it was revealed that this description of events is slightly misleading, since Ahsoka Tano was the one who removed Rex’s inhibitor chip.

Where does Captain Rex fit into The Bad Batch?

Star Wars: The Bad Batch, the new animated Disney+ series from Dave Filoni (Star Wars: The Clone Wars, The Mandalorian) set to debut on the streamer on May 4th, 2021, promises to shed some light on the timeframe in the immediate aftermath of the infamous Order 66. The series follows Clone Wars fan-favorites the Bad Batch, also known as Clone Force 99, as they are hunted by the Empire for disobeying Order 66.

With Rex’s inclusion in The Bad Batch trailer, it’s likely we’ll get to learn more about his journey following his encounter with Ahsoka that both let him know that inhibitor chips existed, and freed him from its control. Perhaps Captain Rex seeks out Wolffe and Gregor with the sole intention of making them aware of their chips, and removing them, a storyline that would fill in some blanks for Star Wars fans.

Prior to resurfacing in Rebels, we last saw Wolffe in The Clone Wars: Season 6 teaming up with Plo Koon on Oba Diah. Audiences last saw Gregor assisting in the escape of R2-D2’s undercover droid unit on planet Abafar. With Wolffe & Gregor in these far-flung locales, we could be in store for an epic storyline as Rex helps the Bad Batch seek out other characters from The Clone Wars who were able to avoid betraying the Jedi and have deserted the Empire

What do you think? What other Clone Wars characters will we see in The Bad Batch?

Comments Off on Captain Rex Returns to Decode ‘Rebels’ Secret