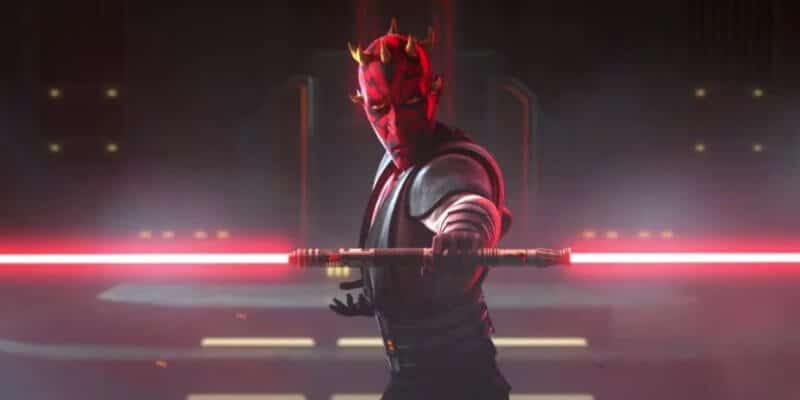 The Star Wars Rebels series finale aired on March 5, 2018, but the animated series remains extremely popular. Many Star Wars fans still can’t get enough of the Ghost ship and her Rebel crew.

Recently, Freddie Prinze Jr., the voice of Kanan Jarrus/Caleb Dume, spoke to Collider and shared a surprising detail about his character — Dave Filoni wanted him to die:

“Dave and I talked about me dying at Maul’s hand, at the end of Season 2, but then the same people who didn’t want me for the project suddenly said, ‘No, he can’t die. He has to be in every episode.’

“So, I guess I won them over, at some point. There were definitely some stand-out moments in there. The fight with Maul getting blinded was special. Teaching Sabine was special. The death, which everyone gives me the most credit for, has nothing to do with me. There’s no dialogue there. That’s all Dave, the animators, music, and people more talented than me that made you think it was me. But nothing will top the audition. The audition was still the best part.”

Presumably “the same people” who didn’t originally want Prinze for the project were Lucasfilm executives.

Jarrus (and, of course, Prinze Jr.) went on to become a major part of the Rebels franchise. He was romantically linked to Ghost pilot Hera Syndulla (Vanessa Marshall). The two even had a son, Jacen Sydulla.

Furthermore, Jarrus trained Padwan Ezra Bridger (Taylor Gray) in the ways of the Jedi. Bridger, of course, was last seen with Grand Admiral Thrawn (Lars Mikkelsen) in the final episode of Rebels.

By this point, Jarrus had sacrificed himself to save Syndulla from Imperial captors in Rebels Season 4, Episode 10 (“Jedi Night”).

Filoni often refers to Jarrus as the “Cowboy Jedi” and the character was unique among the Jedi Order. One fun fact? He is one of only four Jedi Knights known to use a blaster:

“Kanan is one of a few Jedi seen using a blaster, Luke Skywalker commonly used a blaster during his early Jedi training, his padawan Ezra Bridger used a stun gun built into his lightsaber after its destruction he used a blaster and Obi-Wan Kenobi used one, despite his distaste for them, to kill General Grievous.”

Short answer — technically. But, it won’t be an official sequel. Reports indicate that the upcoming Mandalorian spinoff series, Ahsoka, will serve as a live-action sequel to Rebels, after plans for an animated sequel series were seemingly scrapped.

This, presumably, sets up the plot of Ahsoka, in which Tano is likely to begin searching the galaxy for Thrawn and Bridger — she may even end up in the World Between Worlds.

Now that Gina Carano’s Cara Dune has been removed from the Star Wars universe, there is a chance that we could see another Ghost crew connection in The Mandalorian and its interconnected series. Numerous reports indicate that Hera Syndulla could make her live-action debut as the star of Rangers of the New Republic, which was once assumed to be Dune’s show.

Furthermore, Rosario Dawson herself has indicated that Rebels character Sabine Wren may appear in live-action at some point. Casting for these new live-action Star Wars characters has not been confirmed, nor do we know exactly what’s ahead for bounty hunter Din Djarin (Pedro Pascal) and Grogu now that the foundling has left to complete his Jedi training with Luke Skywalker.

Related: How Powerful Will Sith Lord Darth Vader Be in ‘OBI-WAN KENOBI’?

It remains unclear if any Rebels connections will be drawn in The Book of Boba Fett, a series that will supplement The Mandalorian Season 3, but won’t officially be part of the interconnected “trilogy.”

What’s next for Darth Maul?

Although Darth Maul (Ray Park) has already appeared in live-action in Star Wars: Episode I – The Phantom Menace (1991) and, albeit briefly, in Solo: A Star Wars Story (2018), he is seemingly set to make his return soon.

Park recently shared an Instagram picture of Maul’s horns with the geotag “Tatooine.” Since we know OBI-WAN KENOBI: An Original Series is set to begin filming soon and will be set on the desert planet, it seems highly likely that’s where Star Wars fans will see Maul next.

However, there have also been reports that Park will appear in multiple Disney+ series, so don’t count out somehow seeing the Dathomirian crime lord in The Mandalorian saga, too.

Are you excited for what’s next in the Star Wars galaxy? Would you like to see flashbacks of a live-action Kanan Jarrus before his death?