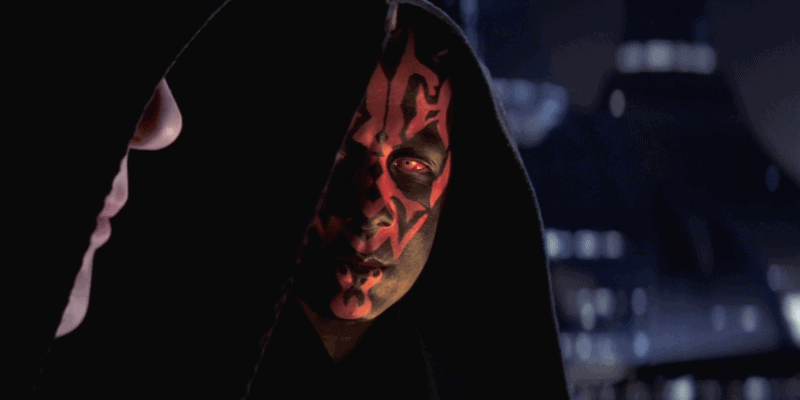 Say what you will about the Star Wars prequel trilogy, but it’s tough to deny that Darth Maul is one of the coolest villains in the Star Wars franchise.

The Dathomirian Sith Lord, who was trained by Darth Sidious, made his first appearance in the Star Wars universe in Star Wars: Episode I – The Phantom Menace (1999). He made a major impression on fans — and may have even changed the trajectory of the entire Star Wars story — when he killed Qui-Gon Jinn (Liam Neeson), leaving his Padawan Obi-Wan Kenobi (Ewan McGregor) in charge of Anakin Skywalker’s training.

As it turns out, however, Darth Maul actually wasn’t the first villain created for the Star Wars prequels. George Lucas often worked closely with Lucasfilm concepts artists. In this case, Iain McCaig was tasked with creating a truly horrifying antagonist.

His initial design was based on the nightmare image of a half-dead face pressed to a window, watching him through the rain. He combined pale features, glistening eyes and blackened teeth with long red ribbons, hanging down the face like pouring blood. When McCaig presented the image to Lucas, the director was taken aback and asked him to tone it down, telling McCaig to instead draw his “second worst nightmare.”

The second time around, McCaig developed the idea for Darth Maul and the horned, black and red Dathomirian Zabrak was born. However, his original concept art was used as the basis for several other characters in Star Wars. One image of a Sith Witch wearing flowing robes served as the foundation for Mother Talzin, who was ultimately revealed to be Maul’s biological mother in the comic book, Darth Maul – Son of Dathomir.

Asajj Ventress, apprentice to Count Dooku in The Clone Wars, was originally designed to fulfil [sic: fulfill] Dooku’s role as the main villain of Attack of the Clones. While Lucas decided these characters weren’t right for the prequels, it is testament to the power of their designs that they later entered the wider Star Wars canon.

Maul, of course, has gone on to play a major role in the Star Wars galaxy. In the animated series Star Wars: The Clone Wars, he continued to antagonize our heroes, even killing Obi-Wan Kenobi’s lover, Duchess Satine Kryze. Maul himself, as Star Wars fans know, was killed by Kenobi in Star Wars Rebels.

Interestingly enough, the situation with Duchess Satine directly ties into Jon Favreau and Dave Filoni’s hit The Mandalorian saga on Disney+. At the end of The Mandalorian Season 2, Bo-Katan Kryze (Katee Sackhoff) is still working to accomplish her quest of retaking the Darksaber — and Mandalore — to avenge her sister’s death.

This storyline is likely to continue into The Mandalorian Season 3.

As for Maul, actor Ray Park recently confirmed that the character will return to Star Wars. Although nothing has been confirmed, many Star Wars fans expect that he will next show up in Deborah Chow’s Obi-Wan Kenobi series in 2022.

Park geotagged his social media post “Tatooine” and we know that the show — set to feature both McGregor reprising as Jedi Master Kenobi and Hayden Christensen as Darth Vader — will take place on the desert planet about ten years after Star Wars: Episode III – Revenge of the Sith (2005).

Are you excited for more Darth Maul in Star Wars?

Comments Off on Darth Maul Was Lucasfilm’s “Second Worst Nightmare”