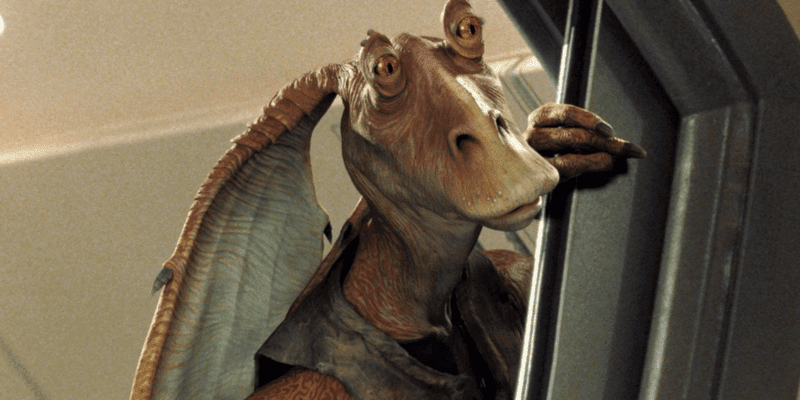 Not long ago, online reports surfaced that Jar Jar Binks would be returning to the Star Wars franchise in a big way as part of the upcoming Obi-Wan Kenobi series.

Obi-Wan Kenobi is set to take place approximately 10 years after the events of Star Wars: Episode III – Revenge of the Sith (2005). It will be set primarily on Tatooine during the Jedi Master’s self-imposed exile.

The Jar Jar Binks rumor indicated that an older, “bearded”  Jar Jar would return and reminisce with Master Kenobi. The idea was that the duo’s interactions would allow Kenobi to flash back to characters, such as his Star Wars: The Clone Wars lover, Duchess Satine Kryze, who died before the series takes place.

Now, however, prequel trilogy Jar Jar Binks actor, Ahmed Best, has confirmed that he will not appear in the Obi-Wan Kenobi series. Best Tweeted:

Thanks for the love, but I will not be in this series. As much as I would’ve loved to be a part of it. But I’m ecstatic to see folks who I love dearly back together doing great things.

Thanks for the love, but I will not be in this series. As much as I would’ve loved to be a part of it. But I’m ecstatic to see folks who I love dearly back together doing great things. https://t.co/5bzLq9yslh

Although Best is not set to appear in the upcoming Deborah Chow (The Mandalorian) streaming event series, other familiar characters are returning to the Star Wars galaxy. both Ewan McGregor and Hayden Christensen will reprise their prequel trilogy roles, as Jedi Obi-Wan Kenobi and Sith Lord Darth Vader/Anakin Skywalker, respectively.

Yesterday, the full cast for the upcoming show was revealed. Disney and Lucasfilm shared the following details in a press release:

Best faced a great deal of backlash regarding his character during the years the prequel trilogy was released from 1999 to 2005. The Gungan served as poorly received comic relief throughout Star Wars: Episode I – The Phantom Menace (1999), Star Wars: Episode II – Attack of the Clones (2003), and, of course, the aforementioned Revenge of the Sith.

At one point, the BBC reported that Best even considered suicide due to his negative experience.

Fortunately, Best’s mental health has improved in the intervening years, and he even returned to the Star Wars universe as a new character, Jedi Kelleran Beq, to host the Jedi Temple Challenge game show.

Are you hoping to see Jar Jar Binks make his Star Wars return at some point?