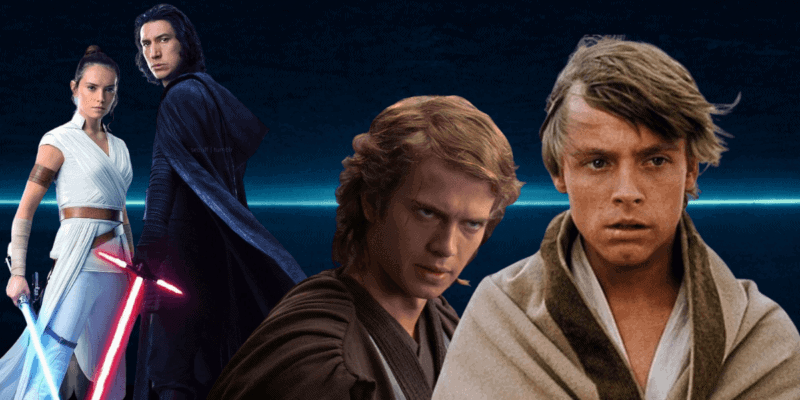 Beginning with Star Wars: Episode I – The Phantom Menace (1999), the Star Wars prequel trilogy was heavily driven by the “Chosen One” prophecy. The ancient Jedi prophecy foretold the coming of a supremely Force-sensitive being that would bring balance to the Force by annihilating the Sith. It’s pretty straightforward, as far as ancient Jedi prophecies go, but after more than 40 years of Star Wars movies, series, novels, comics, and holiday specials, the deceptively simple prophecy has been interpreted and re-interpreted in many different ways.

Who is the Star Wars Chosen One? For years, the prevailing knowledge throughout Star Wars fandom has been that Anakin Skywalker/Darth Vader was — and is — the Chosen One. Ever since Anakin was discovered on Tatooine by Qui-Gon Jinn and Obi-Wan Kenobi with an off-the-charts midi-chlorian count, many Star Wars fans have believed “Anakin” is the only correct answer in this debate. But, after the conclusion of the sequel trilogy with Star Wars: Episode IX – The Rise of Skywalker (2019), and story threads that continue to evolve in the Disney+ series The Mandalorian, the Chosen One debate is not so clear cut.

Let’s take a look at the characters who have been in the Star Wars Chosen One conversation.

If Anakin didn’t exactly bring balance to the Force, he certainly evened up the sides significantly. At the dawn of the Clone Wars, when Emperor Palpatine invoked the infamous Order 66, thousands of Jedi across the galaxy were slain by clone army troopers – with Anakin as the newly minted Sith Lord Darth Vader leading an onslaught on the Jedi Temple of Coruscant. Very few Jedi survived the aptly named Great Jedi Purge – and those who did were driven into hiding, like Grogu. This massive assault brought a balance of sorts, as the number of Sith and Jedi in the galaxy were technically closer than they had been in generations.

Anakin, as Darth Vader, had his biggest Chosen One moment at the iconic conclusion of the original trilogy. Inspired by the compassion of his son, Luke Skywalker (Mark Hamill), Darth Vader sacrifices himself to destroy Emperor Palpatine and the evil in his own heart to finally snuff out the Sith. Anakin made his curtain call finally reunited with his former mentors as a Force Ghost, free of his Darth Vader cybernetic armor.

George Lucas has even declared Anakin as the Chosen One, stating, “When you watch the actual movies in order, the story will become very clear that Anakin is the Chosen One. Even when Anakin turns into Darth Vader, he’s still the Chosen One.”

But, again, a lot has changed in the saga over the years. George Lucas is no longer the sole creative force for Star Wars. Audiences will get even more Anakin Skywalker and Darth Vader with Hayden Christensen reprising his role in the upcoming Obi-Wan Kenobi series led by Ewan McGregor as the Jedi Knight.

The original trilogy makes a convincing argument that Luke Skywalker could, in fact, be the Chosen One. He is the physical embodiment of hope for the Rebel Alliance and everybody oppressed by the Galactic Empire. He destroyed a Death Star and, through his noble actions, persuaded Darth Vader to reject the Dark Side.

Obi-Wan initially had doubts about Anakin as the Chosen One when Qui-Gon asserted his belief. And, we can rightly assume he perceived a few more red flags after his showdown with Darth Vader on Mustafar.

I mean, you would the think the Chosen One would know the importance of the high ground, right?  In an episode of Star Wars Rebels, Obi-Wan Kenobi names Luke as the one likely to balance the Force. After a confrontation with Darth Maul, he is directly asked by the dying Darth Maul if Luke is the Chosen One, to which Obi-Wan responds simply, “Yes.”

The sequel trilogy seems to cast Rey (Daisy Ridley) as the Chosen One, while also insinuating that the moniker itself may be misleading. Through their Force dyad, Rey and Kylo Ren (Adam Driver) were able to share a connection unlike any Force-sensitives before them. Learning that they were part of this foretold Force dyad (another Jedi prophesy!), it appeared they were the Chosen One (plus one).

In the climactic battle of The Rise of Skywalker, the clone Palpatine is able to separate the dyad of Ben Solo and Rey Skywalker. At that moment, Rey is met with the voices of generations of Jedi – including Anakin who says, “Bring back the balance, Rey, as I did.”

With the full might of the Jedi coursing through her, she is able to destroy Palpatine and restore the balance – classic Chosen One move.

Star Wars has released an excerpt from an upcoming book that has reignited the Chosen One debate. In Skywalker: A Family At War by Kristin Baver, the Skywalker Saga is presented as a historical biography of sorts, written by an in-universe historian. The excerpt presents an interesting thought experiment – what if Qui-Gon Jinn was never killed by Darth Maul? What if he became Anakin’s Jedi Master, rather than Obi-Wan?

From the exclusive excerpt on StarWars.com:

“Perhaps Qui-Gon himself would have helped his Padawan return to Tatooine and free the slaves. At the very least, he would have empathized with Anakin’s restlessness with the strict Jedi Code, offering solutions beyond the scope of Obi-Wan Kenobi’s regulation-driven mind. Perhaps Shmi Skywalker would have been saved.”

Indeed, Qui-Gon may have been the master most suited to Anakin. He regarded the ancient beliefs of the Jedi, but wasn’t afraid to challenge them. He was empathetic and fatherly, and a veteran Jedi Master – an ideal model for young Anakin.

Obi-Wan, on the other hand, was much more rule abiding, often following the beliefs of the Jedi Order to the letter, and giving Anakin little quarter. The theory presented in this excerpt argues that Obi-Wan’s tutelage inadvertently created Vader – imbuing in Anakin the kernels of insecurity, anger and fear that would eventually fuel the Sith Lord. Of course, when Qui-Gonn was killed by Darth Maul it brought his time with young Anakin to an abrupt end. Could it be that Anakin was the Chosen One, but the butterfly effect of Qui-Gon’s demise completely changed the arc of the Chosen One prophecy?

What do you think? Who is “your” Chosen One? Do you think the upcoming Star Wars Obi-Wan Kenobi Disney+ series will clarify this decades old debate?