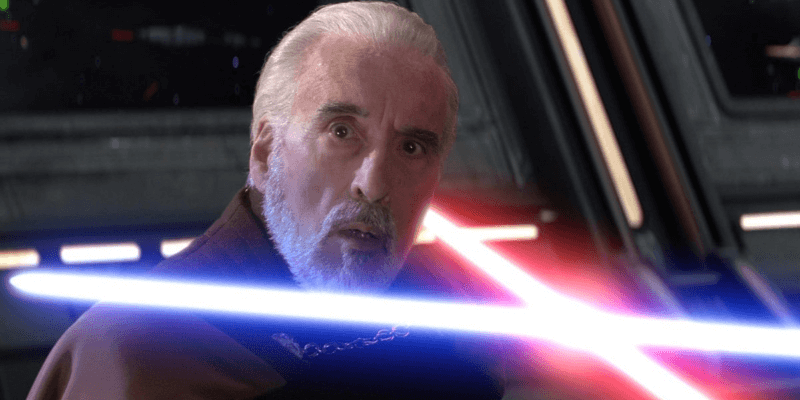 Count Dooku, one of the most legendary Sith Lords in the Star Wars Universe, has just stolen a trick from the X-Men‘s Magneto that opens up a world of possibilities.

Count Dooku, Sith Lord and ex-Padawan of Jedi Master Yoda, is known throughout the Star Wars galaxy as somebody you don’t want to mess with. Count Dooku is a formidable enemy of the Galactic Republic and the Jedi Council — his hobbies including shooting lightning out of his fingertips and mastering close combat fighting with his lightsaber.

A key pawn in the Clone Wars and even in the creation of the Death Star, Dooku was one Jedi whose game was on point in the prequel trilogy. Star Wars fans love him, while Young Anakin Skywalker hated him (and later took his spot).

Count Dooku’s powers rose to an all-time high before his fall in Star Wars: Episode III – Revenge of the Sith (2005), but his time in Star Wars comics has lasted much longer, recently showcasing the aforementioned nod to the X-Men film franchise.

In Star Wars: Age of the Republic – Count Dooku #1 by Luke Ross and Jody Houser, Count Dooku finds himself in a pickle on the planet Sullust. While attempting to partner with the Kaldana Syndicate —  a criminal organization known for arms dealing — to infiltrate the Jedi Order, Dooku finds himself at the wrong end of a blaster.

In an attempt to both disarm his enemies and gain their attention, the Sith Lord copies Magneto from the X-Men movies. In an intimidating manner, Dooku uses the Force to unarm his enemies and point their blasters back at Kaldana’s men.

If this scene seems a little familiar, you’re onto something.

Magneto — in X-Men (2000), X-Men: Days of Future Past (2014), and X-Men: Dark Phoenix (2019) — pulls off this same trick against police officers and alien forces. Magneto only grows in strength with each new X-Men film, but he never ditches this classic move when things go south.

Whenever he wants the high ground, Magneto uses his metal manipulating abilities to disarm his foes and point their weapons back at them. This is a classic tactic of Magneto’s — one that he always hides up his sleeve. One thought, and he could pull the trigger on all of the weapons surrounding him.

It’s pretty awesome Star Wars included this subtle nod to their distant cousin (thanks to Disney) in new work, and hopefully, this won’t be the last time we see an X-Men nod in a Star Wars story (or vice versa).

In episode five of WandaVision, Scarlet Witch/Wanda Maximoff (Elizabeth Olsen) steps outside the Hex to confront Director Tyler Hayward (Josh Stamberg) and his S.W.O.R.D. Agents after sending in an armed drone. Wanda is met with a multitude of armed soldiers. She loses control over her emotions and telepathically aims the dozens of firearms towards Hayward — yet another nod towards Magneto.

On top of this, Wanda makes a seemingly invisible nod to Magneto by waving off her powers while dramatically turning around like Magneto does in Dark Phoenix. In the 20th Century Studios’ X-Men franchise, Wanda and Pietro Maximoff are the children of Magneto, so this nod was a big moment for Marvel nerds.

It seems that manipulating firearms is a common trait in the Maximoff family.

Sir Ian McKellan and Michael Fassbender’s Erik Lehnsherr/Magneto is a fan-favorite. Many are hoping that he’ll make the official crossover into the Marvel Cinematic Universe. Maybe this reference is a sign for the upcoming Multiverse?

What do you think about Count Dooku using Magneto’s famous power?