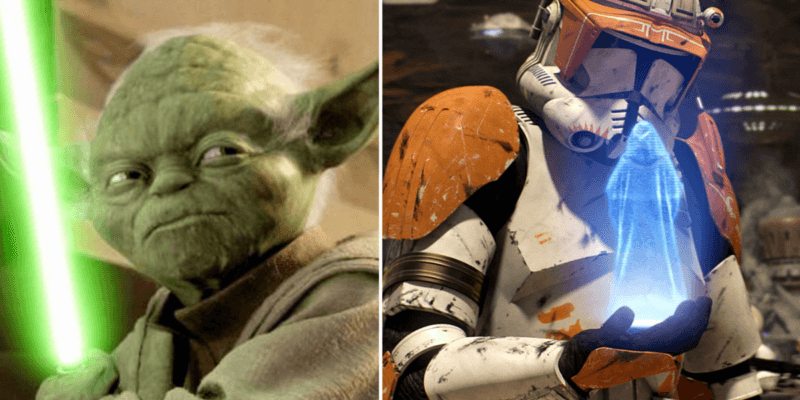 Jedi Grand Master Yoda is one of the most respected characters in the Star Wars galaxy and we continue to learn more about his species thanks to Grogu in the Disney+ series The Mandalorian. From Obi-Wan Kenobi (Ewan McGregor/Alec Guinness) to Din Djarin (Pedro Pascal), just about every character in Star Wars has been affected by Yoda in some manner.

Now, though, some Star Wars fans suggest that he is to blame for Order 66 — not Chancellor Palpatine (Ian McDiarmid) or Anakin Skywalker (Hayden Christensen).

The culmination of the prequel trilogy occurred in Star Wars: Episode III – Revenge of the Sith (2005) when Sheev Palpatine, an unknown Sith Lord and traitor to the Galactic Republic, executed Order 66. The purge of the Jedi began, and the Galactic Empire rose from the Republic’s ashes. With loyal Force users on the run — like Ashoka Tano and Grogu — not many were left to defend others from the Clones’ onslaught and Anakin Skywalker’s demise into Darth Vader.

While it’s evident that Emperor Palpatine is the master planner of Order 66, many question why Yoda didn’t do more to stop the ambush. Since the release of Revenge of the Sith and  The Clone Wars — and again, presumably, in the animated series The Bad Batch later this year — fans have spotted opportunities to stop Palpatine.

Some are now pointing out a specific scene from Star Wars: Episode II – Attack of the Clones (2002) that puts most of the blame on Yoda.

As Jedi Master Obi-Wan Kenobi (Ewan McGregor) attempts to discover the location of Kamino in Coruscant’s Jedi Temple, he finds that the planet isn’t in the archives. Even with librarian Jocasta Nu’s help, the two come to realize that Kamino is seemingly missing. Kenobi then acquires the help of Yoda, who at the time is training younglings, and as they’re studying the star charts, a Padawan questions if the planet was erased from the archives. Bingo.

Yoda then advises Obi-Wan Kenobi to investigate the person behind this trickery. While Master Yoda seems to laughs off the erasing of Kamino, any Star Wars fan hoped he would have taken more responsibility on the issue. Yoda does admit that a Jedi tampered with the files and describes it as a “dangerous and disturbing” riddle, but other than that he keeps the matter between him and Kenobi.

What’s clear now is alerting the Jedi Order and getting to the bottom of the issue with the help of Mace Windu (Samuel L. Jackson).

On Kamino, Prime Minister Lama Su tells Obi-Wan Kenobi that Jedi Master Sifo-Dyas placed the clone army’s order. While that’s fine and dandy, Sifo-Dyas had been dead for numerous years. On top of that, he was the Master to turn Sith Lord Count Dooku. What’s more alarming is that no other Jedi knew about this order, yet they gave it the “okay” after the fact.

Red flags! Even though the origin of the Clone Army was murky, the Jedi Council still adopted the clones. They hired unknown soldiers with a dark past.

Perhaps if Yoda had taken the issue to Mace Windu, the two could have tracked Count Dooku in advance of storming Geonosis. Being on Dooku’s trail could have led the Jedi to Palpatine and his true identity, helping stop Order 66 before loyal clones turned against their leaders.

However, Yoda didn’t pursue any evidence and let the issue grow to a boiling point. Foreseeing a version of Anakin Skywalker’s fall throughout Star Wars: Episode I – The Phantom Menace (1999) and Star Wars: Episode III – Revenge of the Sith,  Yoda’s intervention in a big issue like tampering of the Jedi archives may have protected Anakin from the dark side.

We’re in no way suggesting Yoda is to blame for Order 66 or the Jedi’s oversight of Palpatine, but there were certainly a few missed chances to make things right.

What are your thoughts? Did Master Yoda effectively cause Order 66?