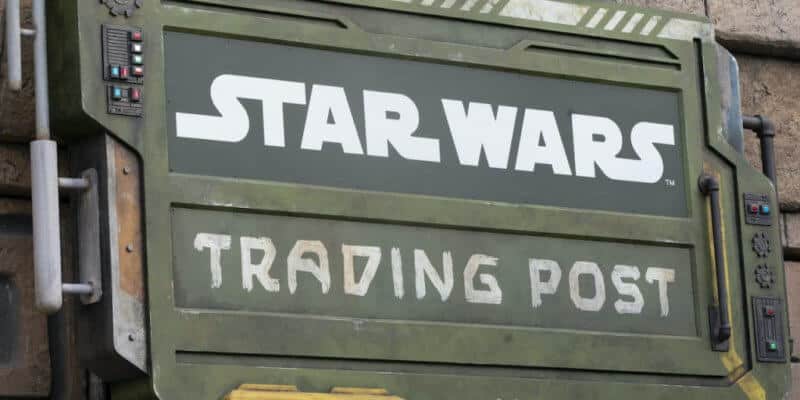 For the first time since Star Wars: A New Hope hit theaters in 1977, fans could actually set foot on a Star Wars planet — in this case, the Outer Rim planet of Batuu.

The shops at Blackspire Outpost became the first Star Wars themed stores to ever exist within any of Disney’s theme parks since The Walt Disney Company acquired Lucasfilm in 2012.

Then, during the 2020 coronavirus pandemic, Disney announced that a temporary Star Wars Trading Post retail outlet would be overtaking the WonderGround Gallery storefront at Disneyland Resort’s Downtown Disney District.

Following the success of the Trading Post, which sold authentic Galaxy’s Edge merchandise, it was confirmed that a permanent Star Wars store would soon be taking over Downtown Disney’s former Rainforest Cafe location.

Related: Fans Could Soon Visit a ‘Star Wars’ Cantina OUTSIDE of a Theme Park

Now, the new (much larger) Star Wars Trading Post is officially opening soon and Guests will be able to visit the very first permanent Star Wars store on Disneyland Resort property outside a Disney theme park!

According to Disney Parks Blog’s original announcement about the new location, which is not set in a specific part of the Star Wars timeline:

The Star Wars Trading Post, which we first told you about in September, will soon be moving to an exciting new spot at the west end of the Downtown Disney District, becoming a destination for all things Star Wars. Walt Disney Imagineers have created a design inspired by a hidden jungle Resistance base, and it even includes Rey’s iconic speeder prominently displayed at the entrance.

From robes and lightsabers to creatures and toys, there’s something unique for every traveler on their galactic journey. The opening assortment will feature merchandise straight from Star Wars: Galaxy’s Edge along with classic Star Wars and The Mandalorian, with apparel, accessories, souvenirs, creatures, droids and more.

Here is what the Disney Parks Blog announcement shared:

First, a sweet surprise: Star Wars Trading Post, which we previewed last month, will open in its new location on Feb. 19, and WonderGround Gallery also re-opens that day with its unique collection of housewares and fashion items!

Star Wars Trading Post becomes your go-to place for all things Star Wars. The design is inspired by a hidden jungle Resistance base and the merchandise offers something for every traveler on their galactic journey ­– with new collections and even a Paddy Frog light-up sipper!

Be sure to check out the new Child-inspired streetwear collection, with designs inspired by “The Mandalorian” series on Disney+. This all-new collection inspired by Grogu, aka the Child, features t-shirts, leggings, hats and more.

Looking for a fun way to spend your “credits”? Try the Batuuan Spira*, a themed Disney Gift Card available at Star Wars Trading Post and good for spending at select participating locations throughout the Disneyland Resort. The Batuuan Spira is a keepsake that’s both fun and useful.

Star Wars Trading Post will open in its new location in the Downtown Disney District on Feb. 19, 2021 and becomes your go-to place for all things Star Wars. The design is inspired by a hidden jungle Resistance base and the merchandise offers something for every traveler on their galactic journey. The opening assortment will feature merchandise straight from Star Wars: Galaxy’s Edge along with classic Star Wars and The Mandalorian, with apparel, accessories, souvenirs, creatures, droids and more. Also, If you’re a Legacy Passholder, you’ll have an opportunity to make a reservation for a special preview event of the Star Wars Trading Post from Feb. 16 – Feb. 18. Check back here on Feb. 9 for more information. The opportunity will be subject to availability, capacity, restrictions and change or cancellation without notice.

Are you excited to visit the brand new Star Wars Trading Post at Downtown Disney? Do you think something similar could ever come to Disney Springs?