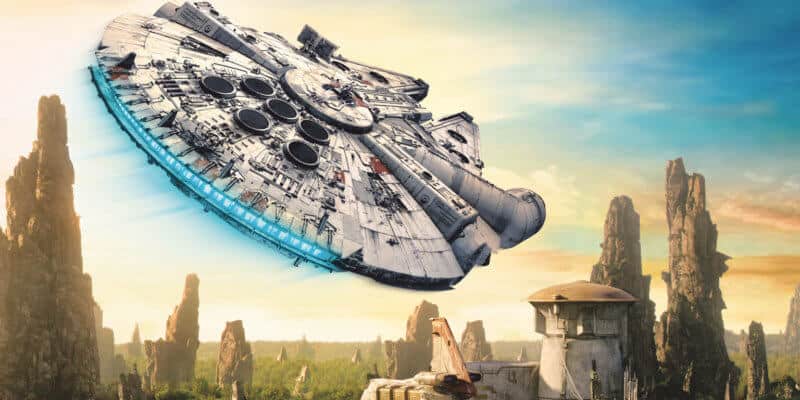 If you’re a fan of Star Wars: Galaxy’s Edge — and, honestly, who doesn’t love the 14-acre expansion at both Disneyland Park at Disneyland Resort and Disney’s Hollywood Studios at Walt Disney World Resort? — one of the highlights of every visit is probably Oga’s Cantina.

Oga’s — which has a rich backstory in the Star Wars: Tales From the Galaxy’s Edge virtual reality game, available to Oculus users — exists on Batuu at both Disneyland Resort and Walt Disney World Resort.

There have, however, been rumors that a second Star Wars cantina could come to Disneyland, not Disney World, in part due to the fact that Florida Guests will soon be able to experience the Star Wars: Galactic Starcruiser hotel and there simply isn’t room for such an addition on Disney property in Orlando.

If you know anything about these unconfirmed reports, they center around the fact that a second cantina once existed in Batuu’s backstory, which is officially part of the existing Star Wars canon. A November 2020 OC Register article shared details about Seezelslak, Oga Garra’s rival cantina owner:

“His [Seezelslak’s] ship is also his cantina and he has actually flown and landed it literally on top of Oga’s,” Perez [ILMxLAB Director Jose Perez III] said. “While he’s there there’s definitely a rivalry that’s going on.”

The rivalry ended — at least for the time being — when Seezelslak fled Black Spire Outpost before Galaxy’s Edge opened at Disneyland in May 2019.

Now, a new theory has emerged, also courtesy of OC Register — What if, instead of a rival cantina existing inside of Star Wars: Galaxy’s Edge, a cantina were to be built outside of the Star Wars-themed land in Disneyland Resort’s Downtown Disney District?

This would solve a number of issues for Disneyland officials, including drawing Guests who might not have previously been interested in Star Wars into a highly themed, immersive space where they can begin developing an interest in the Star Wars franchise and cutting down on crowding in Galaxy’s Edge — which is always popular due to its two attractions, Millennium Falcon: Smugglers Run and Star Wars: Rise of the Resistance — when Disneyland Park and Disney California Adventure reopen after their COVID-19 closure.

Related: Avengers Campus May Have Higher Demand Than Galaxy’s Edge

This also makes a lot of sense given the recent announcement that Disneyland’s now-defunct Rainforest Cafe building will become an official Star Wars Trading Post retail establishment — complete with Rey’s (Daisy Ridley) speeder from the Star Wars sequel trilogy outside!

From robes and lightsabers to creatures and toys, there’s something unique for every traveler on their galactic journey. The opening assortment will feature merchandise straight from Star Wars: Galaxy’s Edge along with classic Star Wars and The Mandalorian, with apparel, accessories, souvenirs, creatures, droids and more. Select items direct from the planet of Batuu also will be available on shopDisney.com.

There has been no word on whether or not droid models and lightsaber replica, including legacy lightsaber styles modeled after popular Jedi and Sith movie weapons, will be available to construct or if only pre-made products will be sold.

Interestingly, this Galaxy’s Edge merchandise store will seemingly cross eras within the Star Wars timeline — in reality, The Mandalorian takes place approximately 25 years before Rey rode her speeder across Jakku in Star Wars: Episode VII – The Force Awakens (2015) — which actually lends credence to the fact that The Walt Disney Company could construct a Star Wars cantina at Downtown Disney without worrying too much about where it fits into the overall Star Wars canon.

Since the Rainforest Cafe building already, presumably, still has kitchen equipment and other food prep necessities, an attached cantina could even serve certain popular menu items — like Mustafarian Lava Buns from Docking Bay 7 and Ronto Roasters — from Galaxy’s Edge to give Guests a taste of the theme park land.

There are even some rumors that Batuu and Galaxy’s Edge could be de-canonized completely — certainly, some Star Wars fans are calling for this, as it opens the door for more popular, recognizable characters, such as Din Djarin, Grogu (AKA The Child AKA Baby Yoda), and even original trilogy characters could exist in Disney theme parks.

Related: What Order to Watch ‘Star Wars’ Movies and Shows?

De-canonizing Star Wars in a theme park setting would open the doors for Disney to do more than create Seezelslak’s at Downtown Disney merely to save space inside of their existing Star Wars land.

Instead, they could, for example, focus on the fact that the Rainforest Cafe building resembles the Great Temple on Yavin 4, which appears in Rogue One: A Star Wars Story (2016). A cantina where you could run into Captain Cassian Andor (played by Diego Luna in the film) or Jyn Erso (played by Felicity Jones in the film) would be incredibly cool for fans and pay homage to Disney’s first Star Wars movie after they purchased Lucasfilm from George Lucas.

If something like this outside-the-parks Star Wars cantina were to do well at Disneyland Resort’s Downtown Disney District, who’s to say a similar concept couldn’t eventually be applied at Walt Disney World Resort’s Disney Springs shopping and dining area?

What are your thoughts on a Star Wars cantina being built outside of Disneyland Park?