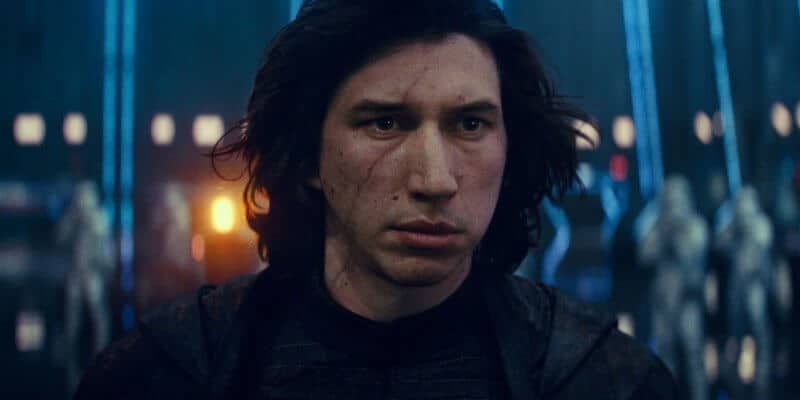 Former United States Marine Adam Driver got his start in acting in the TV series The Unusuals (2009). He followed that with appearances in Leonardo DiCaprio’s J. Edgar (2011), Paterson (2016), and Inside Llewyn Davis (2013) alongside future Star Wars costar Oscar Isaac.

Throughout his Star Wars tenure, Driver got to act alongside Star Wars legends like Mark Hamill (Luke Skywalker), Harrison Ford (Han Solo), and the late Carrie Fisher (Princess General Leia Organa), who passed away in 2016.

Driver also worked with other Star Wars newcomers Daisy Ridley (Rey), John Boyega (Finn), and Isaac as Resistance ace pilot Poe Dameron. The actor’s newfound fame in one of the biggest cinematic franchises of all time earned him many new fans.

“There was a car crash that happened outside a coffee shop in my neighborhood, then I went outside and there’s someone in the building across the street, yelling out their window like, ‘Is everybody ok? Is everybody ok?’

And then there was the guy, the SUV who crashed … he kind of got out, he was dazed, and the woman who was in the car, she was crying.”

The article continued with more details about the bizarre fan interaction:

While Driver was watching the incident to see if everyone was ok, a random fan approached him with their child, asking for a picture.

“And in the midst of that, somebody brought up their kid and was like, ‘Hi, big Star Wars fan,’ Driver said. ‘And I’m like, ‘I don’t know what I’m supposed to do’.”

Driver ended up taking an extremely awkward photo with a coffee and a $100 bill in his hand, as the paramedics rushed by him in the background.

Talk about getting your day off on the wrong foot! While we sincerely hope no one was injured in the car accident, the story goes to show just how much Star Wars fame can change an actor’s life.

Daisy Ridley has previously spoken about how much her life changed after she became part of the Star Wars galaxy, too.

At this time, it is unknown if the leader of the Knights of Ren will ever return to the Star Wars universe. At the end of Rise of Skywalker, Driver’s Ben Solo used his remaining life force to save Ridley’s Rey after the duo defeated an Emperor Palpatine (Ian McDiarmid) clone on Exegol.

Although this scene completed Kylo Ren’s redemption arc, it made it impossible for the character to return outside of a prequel series.

There is, however, a chance that Stranger Things actor Finn Wolfhard could get his chance to play a young Ben Solo now that Luke Skywalker has been reintroduced to the Star Wars story in the Mandalorian saga.

Eventually, a Star Wars streaming series could potentially feature Solo’s destruction of Skywalker’s new Jedi Temple. It is important to remember, however, that nothing has been confirmed by Lucasfilm or Disney at this time.

Watch the full SAG-AFTRA interview with Adam Driver below:

Do you want to see Adam Driver return to Star Wars?