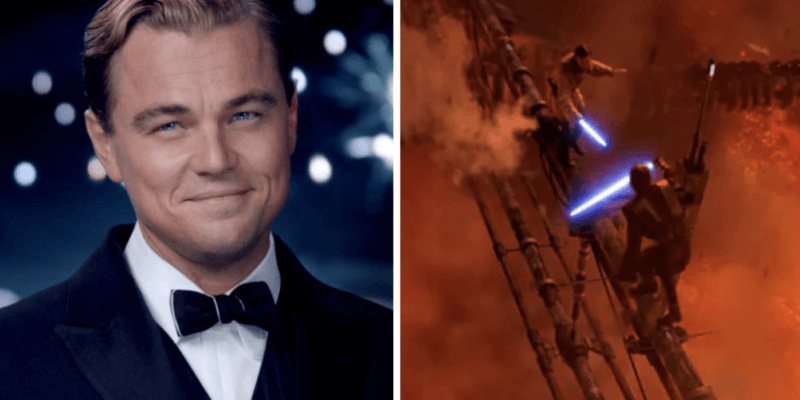 When the Star Wars prequel trilogy was announced in the 1990s, one of the first things fans began wondering was who would play Anakin Skywalker — the “Chosen One” who descended from a future as a promising Jedi Knight to a future as Darth Vader.

What you might not realize, however, is that before Hayden Christensen was cast in George Lucas’s Star Wars prequels, A-list actor Leonardo DiCaprio was considered for the role. Just take a moment and picture DiCaprio as Darth Vader.

At the time casting talks would have started before Star Wars: Episode II – Attack of the Clones (2003), both Christensen and DiCaprio were already well on their ways to successful careers.

DiCaprio had his breakout role as Jack Dawson in James Cameron’s box office smash hit Titanic (1997) with co-star Kate Winslet, who played Rose. He had also already appeared in Romeo + Juliet (1996), The Man in the Iron Mask (1998), Gangs of New York (2002), Catch Me If You Can (2002) before Attack of the Clones released.

Christensen, on the other hand, hadn’t had as much major motion picture success, but had acted in Goosebumps, Real Kids, Real Adventures, and Are You Afraid of the Dark? before playing Jake Hill Conley in cult-classic, The Virgin Suicides (1999).

DiCaprio has shared that he turned down the leading role of Jedi Knight Anakin Skywalker:

“I did have a meeting with George Lucas about that, yes. I just didn’t feel ready to take that dive. At that point.”

Oscar-winner DiCaprio has, of course, gone on to have an incredible career, playing the likes of Howard Hughes in The Aviator (2004), FBI Director J. Edgar Hoover in J. Edgar (2011), and F. Scott Fitzgerald’s Jay Gatsby in The Great Gatsby (2013). He also, at long last, took home an Academy Award for The Revenant (2015).

Other popular films for the modern Hollywood icon include Shutter Island (2010), Quentin Tarantino‘s Django Unchained (2012) and The Wolf of Wall Street (2013), for which he won a Golden Globe Award.

Currently, DiCaprio is working on five projects — Don’t Look Up, The Black Hand, Killers of the Flower Moon, The Devil in the White City, and Roosevelt.

If, however, his career trajectory had gone differently in the 1990s, we could be gearing-up to see him return to the Star Wars universe. Christensen is currently set to reprise his role as Anakin Skywalker/Darth Vader in the upcoming OBI-WAN KENOBI: An Original Series on Disney+.

What is going on with OBI-WAN KENOBI?

Like many movie and TV projects, Deborah Chow’s OBI-WAN KENOBI series faced coronavirus-related production delays as a result of the 2020 pandemic.

Fortunately, things seem to be moving in the right direction. Lead actor Ewan McGregor — who is set to join Christensen in reprising his prequel trilogy role as Jedi Master Obi-Wan Kenobi — recently assured the Star Wars fan community that the show will begin filming in the spring in Los Angeles.

This cleared-up any lingering rumors about the series shooting in Little Marlow, England, where a Star Wars set — presumably for Rogue One prequel series, Andor — has been constructed.

OBI-WAN KENOBI: An Original Series will take place approximately ten years after the events of Star Wars: Episode III – Revenge of the Sith (2005) during Kenobi’s exile on Tatooine. The official description reads:

Tatooine-a harsh desert world where farmers toil in the heat of two suns while trying to protect themselves and their loved ones from the marauding Tusken Raiders. A backwater planet on the edge of civilized space. And an unlikely place to find a Jedi Master in hiding, or an orphaned infant boy on whose tiny shoulders rests the future of a galaxy

Although few casting details are known beyond McGregor and Christensen, a recent leak indicates that actress Denise Gough could play Obi-Wan’s Clone Wars love interest, Duchess Satine Kryze, in live-action for the first time. Aladdin (2019) actress Naomi Scott has also been connected to the project.

There are also rumors that both Jar Jar Binks (Ahmed Best) and fan-favorite Ahsoka Tano (Rosario Dawson) may return to the Star Wars franchise in the series.

Are you looking forward to OBI-WAN KENOBI? Do you wish we were seeing Leonardo DiCaprio as Darth Vader instead of Hayden Christensen?