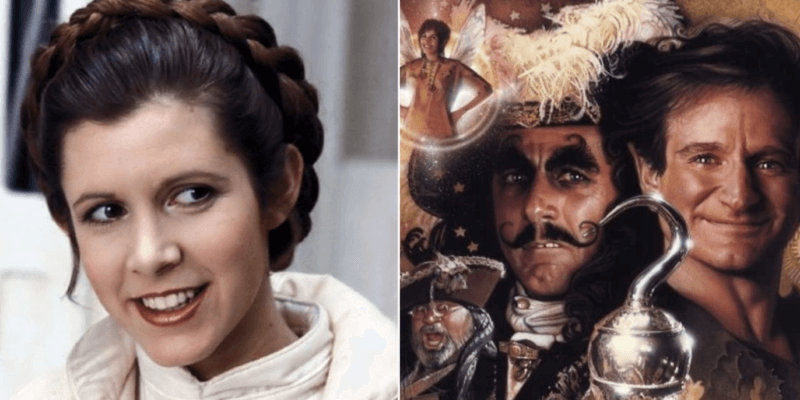 Long before Carrie Fisher was cast as Princess Leia Organa in George Lucas’s Star Wars: A New Hope (1977), she was already Hollywood royalty.

The late actress was the daughter of Hollywood icon Debbie Reynolds and famed singer Eddie Fisher. Fisher’s childhood was fraught with drama, including her father famously leaving her mother for the legendary Elizabeth Taylor, and she learned the ins and outs of Tinseltown at a young age.

Then, Fisher herself went on to be cemented in cinematic history thanks to the massive success of the Star Wars franchise. Following A New Hope, she and her costars, Mark Hamill (Jedi Knight Luke Skywalker) and Harrison Ford (Han Solo) went on to play their characters for over 40 years.

From the original trilogy — which also includes Star Wars: The Empire Strikes Back (1980) and Star Wars: The Return of the Jedi (1983) — to the recent Disney sequel trilogy, Fisher, Hamill, and Ford long shouldered the popularity of the Star Wars universe.

Fisher’s death rocked the Star Wars fan community and the entertainment industry. What many don’t realize, though, is that Fisher had a hand in far more than Star Wars. The actress was also a talented screenwriter who worked on many popular films throughout her career.

As a matter of fact, the Academy Award-winning Hook (1991) starring Robin Williams (Peter Pan) and Julia Roberts (Tinker Bell) is one of the movies that could have looked very different without Fisher’s involvement as a script doctor!

“Fisher found it enjoyable to essentially ghostwrite for Hook and provide Julia Roberts more comedic moments. Overall, she felt it was “just nice being treated with a different kind of respect than certainly you would be as an actor.” This is in spite of receiving the Spielberg treatment; Hook screenwriter Jim V. Hart explained, “Steven tends to use writers like paintbrushes, he wants this writer for this, this writer for that.”

Despite enjoying the experience, Fisher took on new jobs “to get off of that.” Her reflection [in Fisher’s book Postcards From the Edge] is as to-the-point as you could hope: “So it just went from Hook to whatever. Sister Act. Lethal Weapon 3. The River Wild. Some really bad ones too.”‘

As it turns out, Spielberg’s Hook movie might have been a very different film without the late Carrie Fisher essentially rewriting Julia Roberts’s character. If you’ve ever enjoyed a journey to Neverland alongside Williams’s adult Peter Pan and Dustin Hoffman’s infamous Captain Hook, you can thank Princess Leia for the fun you had along the way.

Although Hook’s unique Peter Pan story is one of the most popular scripts Fisher worked on among Disney fans, she also had a hand in numerous other popular films. As mentioned above, she spiced up Whoopi Goldberg’s Sister Act (1992) and rewrote Rene Russo’s Lethal Weapon character.

Another fact that will interest Disney and Lucasfilm fans is that Fisher worked on popular animated movie, Anastasia (1997).

Although many moviegoers mistakenly believed Anastasia was a Disney film even in the 1990s due to the animation style, it didn’t officially join the Walt Disney Company catalogue until the company acquired 20th Century Fox — now 20th Century Studios — in 2019.

In one of the movie’s most pivotal scenes, young orphan Anya debates and ultimately decides to venture on a “Journey to the Past” to find her family. “Princess Leia wrote that scene,” composer Stephen Flaherty joked. His and Lynn Ahrens’ initial vision had Anya already starting her journey when the musical number started.

In 2008, Fisher spoke to Newsweek and shared why she ultimately left the screenwriting game:

“Now it’s all changed, actually. Now in order to get a rewrite job, you have to submit your notes for your ideas on how to fix the script. So they can get all the notes from all the different writers, keep the notes and not hire you. That’s free work and that’s what I always call life-wasting events.”

And, as many who knew Fisher — including Hamill and Star Wars sequel trilogy stars Oscar Isaac (Poe Dameron) and Daisy Ridley (Rey) — have said, there is nothing the actress hated more than wasting life’s precious moments.

Did you know Carrie Fisher was a prolific script doctor in addition to her decades of work in the Star Wars galaxy?