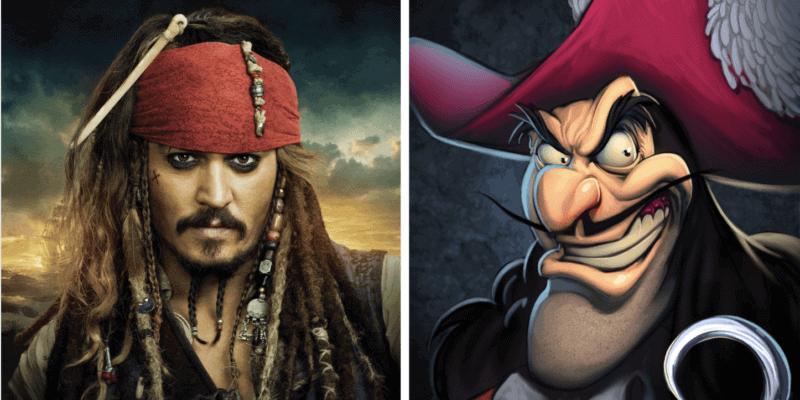 If you’re a Pirates of the Caribbean fan, the franchise is probably synonymous with Captain Jack Sparrow, Johnny Depp’s impossibly bumbling, yet endearing and ultimately —  no matter how accidental his successes are — effective pirate.

What you might not realize, however, no matter how much you love the five existing Pirates of the Caribbean films — The Curse of the Black Pearl (2003), Dead Man’s Chest (2006), At World’s End (2007), On Stranger Tides (2011), and Dead Men Tell No Tales (2017) — is that there are also companion novels that go alongside the popular movie franchise.

One of these books, The Price of Freedom (2011) by A.C. Crispin features a surprising cameo appearance by another famous Disney pirate: Captain Hook from the J.M. Barrie novel and the Walt Disney Studios animated classic, Peter Pan (1953).

…[The Price of Freedom] was billed as the first adult novel in the Pirates of the Caribbean franchise and contained in-universe references to Peter Pan’s Captain Hook. While Hook’s surname isn’t revealed in the book, pirates Don Rafael and Edward Teague (Jack Sparrow’s father) discuss an old acquaintance named James who matches Hook’s description: namely, that he’d disappeared for a while, lost a hand, been fitted with a hook, didn’t appear to age between meetings, and had developed a fear of children

Before we go any further, let’s take a moment to appreciate that Captain Sparrow’s father’s name is remarkably similar to Edward Teach — the real name of legendary actual “pirate of the Caribbean,” Blackbeard, whose name is actually mentioned — alongside Long John Silver — in Peter Pan.

Furthermore, Captain Hook and his first mate, Smee, have actually taken a ride on Disneyland Resort’s Pirates of the Caribbean attraction, prior to the installation of the Captain Jack Sparrow animatronics, however. Truly, “it’s a small world, after all.”

Moving on — the implication here, of course, is that Rafael and Teague’s long-lost acquaintance has gone missing because he is, in fact, in Neverland. This would also explain his seemingly irrational fear of children. After all, the Lost Boys, Peter Pan’s child-warrior clan, can be quite terrorizing when they want to be.

While it is highly unlikely that the Pirates of the Caribbean franchise will ultimately venture to Neverland, there’s certainly no time like the present for the movie series to consider a serious shake-up.

With lead actor Johnny Depp reportedly axed from future Pirates franchise movies amid the unfavorable outcome of his libel lawsuit against United Kingdom newspaper, The Sun — he and ex-wife Amber Heard have both dealt with highly publicized domestic violence allegations as a result — Disney needs something, a new “Hook,” perhaps, to keep people interested in the floundering franchise.

Although a Neverland excursion is probably a pipe dream, the surprising Captain James Hook cameo appearance certainly gives POTC fans (and maybe, just maybe, Disney executives) something to think about in regard to the adventure film series moving forward.

And, with Elizabeth Swann (Keira Knightley), Will Turner (Orlando Bloom) — and, therefore, piracy den Port Royal — and even Captain Barbossa (Geoffrey Rush) likely out of the picture for good, it just might be high time for the high seas to get a new, yet familiar, storyline.

What are your thoughts on the Pirates of the Caribbean Captain Hook “appearance”? Disney’s Pirates remains popular, even after nearly 20 years, so would you welcome a Neverland twist?