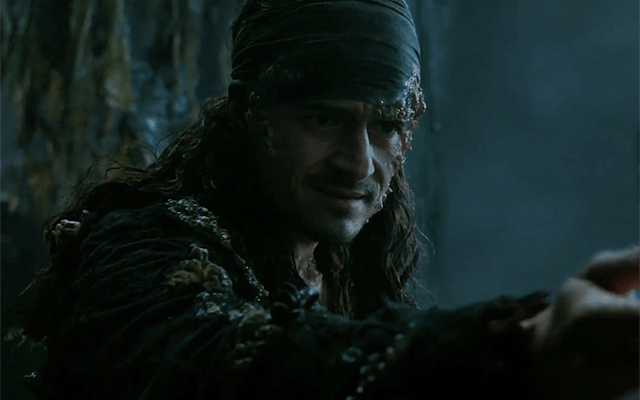 It was believed for some time that this may be the final movie for the popular franchise. The events of the film, including the post-credits scene, may point to the contrary. What exactly did that scene leave us for the future though? Before diving right into the scene after the credits, some context may be needed. The premise of the film revolves around Captain Jack Sparrow and our new young heroes, Henry Turner and Carina Smyth, finding the trident of Poseidon. They learn that breaking the trident will break all curses, including the one put on Will Turner, Henry’s father.

Henry successfully breaks the trident allowing his once-cursed father to return home. The big return scene featured one of the film’s big surprises as Keira Knightley’s Elizabeth Swann showed up to greet her returning husband. Happy ending right? It would have been, if we didn’t revisit the reunited couple after the credits.

The scene opens with Will and Elizabeth asleep in their bed. The sounds of a thunder storm can be heard from the outside and are soon followed by the sound of footsteps. The footsteps grow louder and eventually the door to their bedroom is pushed open and a figure enters. Water drips from the mysterious intruder and with a flash of lightning we see a raised claw. While we never get a completely confirmed identity of the intruder, it can be safely assumed that it is Davy Jones! How is this possible? Didn’t we see him die in the third movie? Well sure, but we also saw Captain Barbosa die in the first one, and Sparrow die in the second one. Despite the title of the movie, the dead usually return to tell their tales.

The first thought is obviously that Will is suffering from nightmares, as he awakes to the sound of thunder and the shadowy figure disappears. That theory is quickly dispelled though as the last image we get before it cuts to black is a few loose barnacles on the floor next to the bed.

We now know that Jones was really there. So how did he come back? It was made very clear a few times during this film that breaking the trident would break ALL curses, including that of Davy Jones. That still doesn’t completely explain why he’s alive though.

We saw Captain Salazar’s curse broken and, despite his human form being killed a long time ago, he returned to a living human state. Perhaps the same happened to Jones. Why is he still this creature then?

In one of his most memorable scenes, Jones and Calypso explained their story to the audience. The scene culminated in Jones saying to Calypso, “my heart will always belong to you,” before making his exit. While that seems like a touching sentiment, it is meant both figuratively and literally.

You may remember the story. Jones actually cut out his heart and placed it in the Dead Man’s Chest. This symbolized that his heart belonged to the sea or Calypso, who is essentially the embodiment of the sea.

So if Jones was resurrected into his human form, he would have been brought back to life without a heart. It stands to reason that he would hold to his pledge, effectively reinstating the curse and bringing back the creature that he once was.

That resurrected creature would likely want revenge on the man that stabbed his heart and took his ship from him. Which is why he’s back for Will Turner.

Will this lead to another Pirates of the Caribbean film? We’ll have to wait to see what’s beyond the horizon.