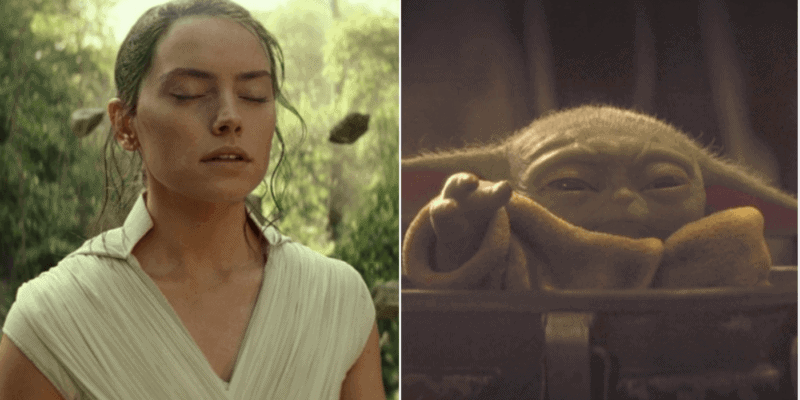 Arguably, the Star Wars sequel trilogy is one of the least popular Star Wars projects in recent memory, while The Mandalorian has excited the fan base in a way nothing has since Star Wars: The Empire Strikes Back (1980).

Inevitably, of course, Ridley’s time in the Star Wars franchise came up and it turns out she (like nearly everyone else) is a Mandalorian fan.

Ridley has mentioned she’s a fan of The Mandalorian and that show’s beloved Baby Yoda, Grogu, shares a rarely seen ability with Rey – both have been able to use the Force to heal others – along with Kylo Ren, I should mention, which I forgot about when speaking to Ridley!

When I jokingly asked how she felt about Rey and Grogu’s Force healing abilities and if she felt it was a competition or a bond, Ridley replied, “Here’s the thing… Baby Yoda is immensely powerful but also Baby Yoda is almost cheating because he’s so sweet that whatever Baby Yoda did you’re like, ‘Aww!’ Whereas I’m a human so I don’t have that. So I feel like Baby Yoda has had an easier time being a Force healer because it’s Baby Yoda being a Force healer. We’re both good in that space but he definitely has cuteness on me.”

Whether or not you agree with Ridley that Grogu is “cheating,” she’s not the first person to point out the 50-year-old infant’s cuteness in connection to the Force. In fact, for a time, rumors ran rampant that the tiny foundling would ultimately turn on his father figure, titular Mandalorian Din Djarin (Pedro Pascal) and go to the dark side.

Some even thought he would help Ben Solo/Kylo Ren (Adam Driver) in the destruction of Luke Skywalker’s new Jedi Academy, constructed after the Order 66 destruction on Coruscant — now, however, this seems unlikely.

In The Mandalorian Season 2 finale episode, however, Grogu was (finally) successfully delivered to the Jedi Order. He, Djarin, and several of their companions — including Fennec Shand (Ming-Na Wen) and Bo-Katan Kryze (Katee Sackhoff) — were rescued from Moff Gideon’s (Giancarlo Esposito) Dark Trooper squadron by none other than Jedi Knight Luke Skywalker (Mark Hamill).

Ironically, Skywalker — albeit reluctantly — went on to train Rey on Ahch-To about 25 years after he became Grogu’s Jedi Master.

At this time, we’re not sure what’s next for either Rey or Grogu in the Star Wars story. Ridley has seemingly gone back and forth on whether or not she would reprise her role as the sequel trilogy Jedi character.

It’s worth noting that her co-stars, John Boyega (Finn) and Oscar Isaac (Poe Dameron), have expressed no interest in reprising their Star Wars roles.

As for Grogu, The Mandalorian Season 3 may need to air without him at first. But, Djarin promised the two will meet again, so we can probably expect to see a happy reunion at some point — perhaps in the interconnected streaming event featuring characters from The Mandalorian, Ahsoka, and Rangers of the New Republic.

What do you think about Ridley’s opinion regarding Grogu’s Force abilities?