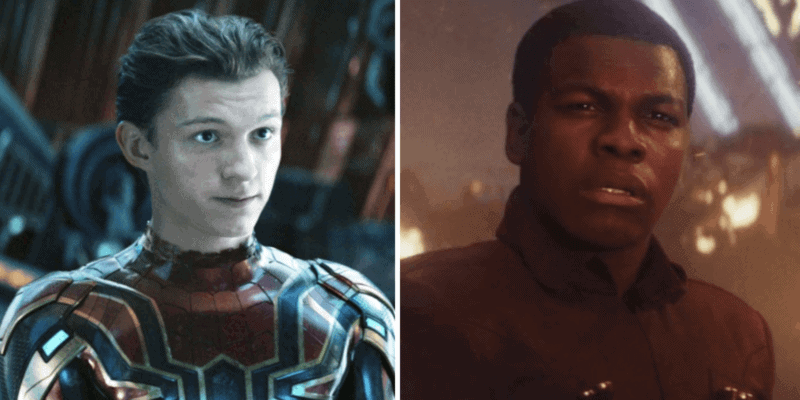 Holland is Kevin Feige’s Spider-Man/Peter Parker and he has cemented himself as an MCU legend. The young actor has already appeared in Captain America: Civil War (2016), Spider-Man: Homecoming (2017), Avengers: Infinity War (2018), Avengers: Endgame (2o19), and Spider-Man: Far From Home (2019).

Before he joined the MCU, however, it seems that Holland was almost part of another major franchise owned by The Walt Disney Company — Star Wars.

I remember my audition for “Star Wars,” I was like four or five auditions in, and I think I was auditioning for John Boyega’s role. I remember doing this scene with this lady, bless her, and she was just a drone. So I was doing all of this, like, “We gotta get back to the ship!” And she was going, “Bleep, bloop bloop, bleep bloop.” I just couldn’t stop laughing. I found it so funny. And I felt really bad, because she was trying really hard to be a convincing android or drone or whatever they’re called. Yeah, I obviously didn’t get the part. That wasn’t my best moment.

Boyega has become well-known for his involvement in last summer’s Black Lives Matter protests in London, even giving an impassioned speech at one point. He has also spoken out about his experience as a black actor in the Star Wars franchise, garnering support from many Star Wars fans who feel his character was sidelined.

Following the release of Chaos Walking, Holland will appear in Uncharted as Nathan Drake and in the Russo brothers’ Cherry before Marvel’s Spider-Man 3 is released.

For Boyega’s part, the actor most recently played Leroy Logan in Small Axe and Jack Locke in Tomorrow’s Monsters. He is set to appear in Naked Singularity, They Cloned Tyrone, The Test, Rebel Ridge, and Borderland in the near future. The actor has also expressed interest in playing iconic film character, James Bond, at some point in the future.

What do you think about the fact that Tom Holland almost appeared in Star Wars?