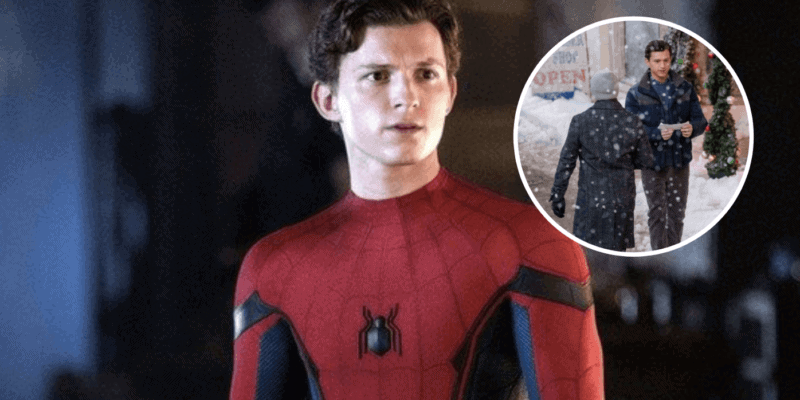 The powers-that-be at Marvel Studios — we see you, Kevin Feige — have been keeping the details of Spider-Man 3 under wraps as much as possible.

Rumors, of course, are running absolutely rampant, with Avengers and Doctor Strange franchise star Benedict Cumberbatch seemingly confirming that the movie will delve into the multiverse and reports circulating that former Spider-Man actors Tobey Maguire and Andrew Garfield — along with other past cast members like Kirsten Dunst, Jamie Foxx, and Emma Stone — will all return for the third installment in Marvel’s Spider-Man saga.

In spite of these numerous rumors, of course, the plot will primarily center around Marvel Avenger Tom Holland’s version of Spider-Man/Peter Parker. Aunt May (Marisa Tomei), Ned Leeds (Jacob Batalon), and MJ (Zendaya) are all set to return and reprise their roles.

Now, new set photos have given away a major detail about the upcoming film — it’s set (at least in part) during the holiday season! Just Jared shared images with some information about the scene that was being shot.

Tom walked over as if almost preparing to ask her out, but appeared to think better of it once he went inside. Zendaya slid his coffee across the counter before Tom walked out.

As we await more official details about who will be joining the Spider-Man 3 cast and what the exact plot will be, set photos like these are incredibly exciting for MCU fans.

Currently, Spider-Man 3 — which will feature a storyline that follows the events of Homecoming sequel, Far From Home, is slated for a December 17, 2021 release date, so this fun Christmas setting certainly makes sense!

Are you looking forward to seeing more from the Spider-Man set as filming continues in Atlanta? Are you a Marvel fan anxiously awaiting the first trailer for the upcoming movie?