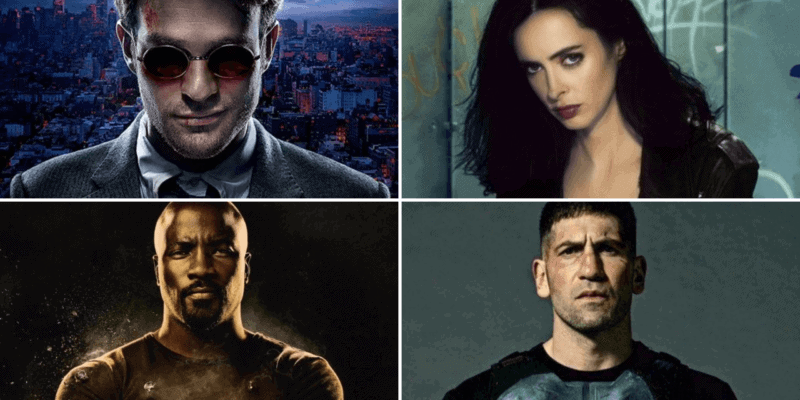 That being said, the revivals may not happen just yet. Feige has said that while the focus is firmly on the Disney+ content and Phase Four movies, we may still see the return of Daredevil and co in the future.

Feige was asked by Deadline whether there were plans to revive the Netflix shows. His response?

“Well, certainly you’ve seen what we announced at Comic-Con a year and half ago and on Disney Investor Day a few weeks ago, so that’s our focus … But I’ve been at Marvel long enough to never say never about anything.”

That’s not a no! Plus, we do know that the rights for characters like Daredevil and The Punisher now sit with Marvel Studios again — they were originally acquired by Netflix before Disney+’s inception. Hopefully, this means that we can one day see a return to this darker corner of the Marvel Cinematic Universe with the characters Marvel fans grew to love.

Who Are the Stars of the Marvel Netflix Shows?

Charlie Cox as Daredevil and Jon Bernthal as The Punisher in particular quickly became incredibly iconic and the definitive version of these heroes in the minds of many Marvel fans. Daredevil was the most popular series as fans petitioned Disney to revive it with the original cast — said cast includes Vincent D’Onofrio, Deborah Ann Wolf, Elden Henson, and Wilson Bethel.

If you’re a fan of Marvel comics, you should still check these shows out as they’re available to stream on Netflix. The only downside is that several of them end on cliffhangers, especially Daredevil season three.

If you believe Feige, a Marvel Netflix shows revival could happen at some point. Here’s hoping.

It’s not like we haven’t got a plethora of Marvel tv content on the way. Just today Marvel Studios launched WandaVision, it’s first original series exclusive to Disney+. However, unlike the Paul Bettany and Elizabeth Olsen led show, the Netflix series’ were dark, gritty, and violent.

There is a tonne of content coming up including The Falcon and The Winter Soldier, Loki, and Ms Marvel. However, it is difficult to see where Daredevil, Jessica Jones, or Luke Cage could fit in. Their Marvel shows are just more adult-orientated. If Kevin Feige and company are to bring these characters into the Marvel Cinematic Universe proper, there’s probably going to need to be some magical tomfoolery from Doctor Strange.

If the Marvel universe is to bring back Daredevil and the Netflix shows we’ll be waiting with bated breath. However, if it’s just a pipe dream, well always have the original series to rewatch fondly.