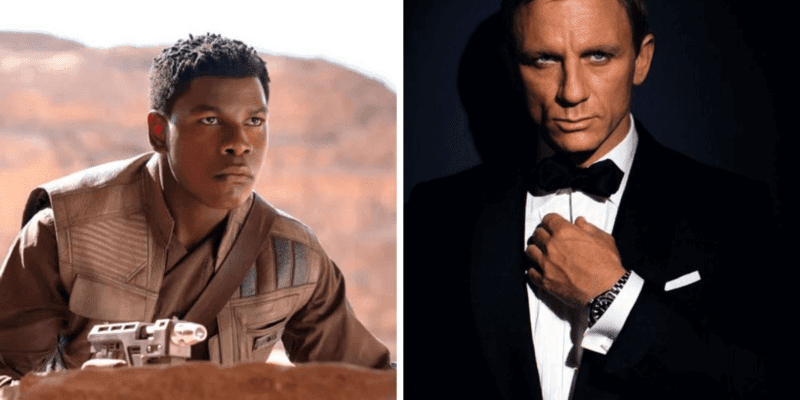 Each time one James Bond actor announces they are stepping down from the role, rumors start to fly about who could take over.

John Boyega, of Star Wars fame, supports the idea that he could follow up Daniel Craig in the iconic role of James Bond.

Related: Is John Boyega Really Ready to Walk Away From ‘Star Wars‘

Letitia Wright, who you will recognize from Marvel’s Black Panther, was asked to choose who she thought would be a better fit to play 007, between Daniel Kaluuya or John Boyega.

I say Boyega because I know he would love it. Daniel would do the work and stay behind – he likes to stay low key, so that’s too much [for him]. He can still play Bond too, but I know John Boyega would just… yeah.

Boyega, in response to Letitia’s comments, was very excited about the prospect of taking up the Bond mantle! He said:

Ooh! Hey, listen. [With] Steve McQueen directing? Let’s do this. We can show them something different – we [would] still bring that sophistication – James Bond has to be James Bond – but we could do something with that.

We cannot wait to see who could be the next Bond, but we do like the idea of John Boyega. He gave a very solid performance in the latest Star Wars trilogy.  But, until a new 007 is officially announced we all just have to wait and see!

As we know, Boyega was in the news earlier this year speaking out against Disney, accusing the company of using his race for the marketing of the news Star Wars trilogy, but not giving the character equal screen time and depth of story as other characters in the film. You can read more about that here.

As far as when we will get an announcement about if the next Bond will be Boyega or someone else, we may be waiting awhile. The last installment in the Daniel Craig Bond series, No Time to Die, has been delayed due to the coronavirus and no timeline for the next film has been announced.

What do you think? Would John Boyega be your pick for the next James Bond? Let us know in the comments!