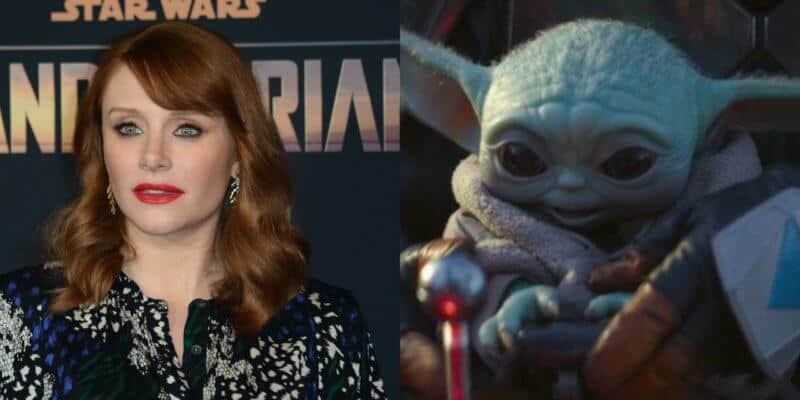 There hasn’t been a single Star Wars, or dare I say, Disney character to walk on the scene and sweep the world off their feet the way Grogu (AKA Baby Yoda) has. Din Djarin’s (Pedro Pascal) foundling only needs to tilt his head and Disney+ viewers watching The Mandalorian will swoon. As a newer viewer to the Star Wars show, I have been lucky enough to recently discover Grogu in terms of the show — and falling in love with the puppet has been a breeze. From memes to merchandise, Grogu is a gold mine. But will audiences still love “the kid” as much if he turns to the dark side?

Actress and director Bryce Dallas Howard has been with The Mandalorian for both seasons. Ron Howard’s daughter first directed Chapter 4: Sanctuary and followed it up with Chapter 11: The Heiress, in which Bo-Katan Kryze (Katee Sackhoff) was introduced in live-action for the first time. In an extensive interview with Digital Spy, Howard was asked about Grogu and if our cute little “Baby Yoda” would actually turn to the dark side, which has been theorized for some time.

Interviewer David Opie asked, “So of course, I need to ask you about Baby Yoda. In the last few episodes, it’s been hinted that he might turn to the dark side. There’s a lot of fan theories, and people are worried. What are your thoughts on that and what do you think is going to happen?”

Bryce Dallas Howard was ready to answer this question, and responded:

“Well, I’m definitely not going to share any guesses, because I know [laughs]. But what I will say is that, for me, the joy of working with Baby Yoda is that, yes, it’s an intoxicatingly cute, adorable being, but you can only play that note so many times, right?

That was a wonderful part of the journey for Mando and Baby in season one, but in season two, there’s an opportunity for the character of Baby – who, by the way, is not a baby [laughs]; who is, according to human years, fully middle-aged. But to understand: “OK, who is this being?” And it’s not just binary.

So, that thematically, of course, is going to play a role in any Star Wars story. I’m all for characters getting fleshed out.”

Although Howard does not give away whether or not Grogu will turn to the dark side, the comment “but you can only play that note so many times, right?” almost sounds like a tease that we will see Grogu in a different light — no pun intended — as the show and character continue to grow.

The Mandalorian Season 3 is slated to premiere Christmas 2021.

Do you think Grogu will go to the dark side?