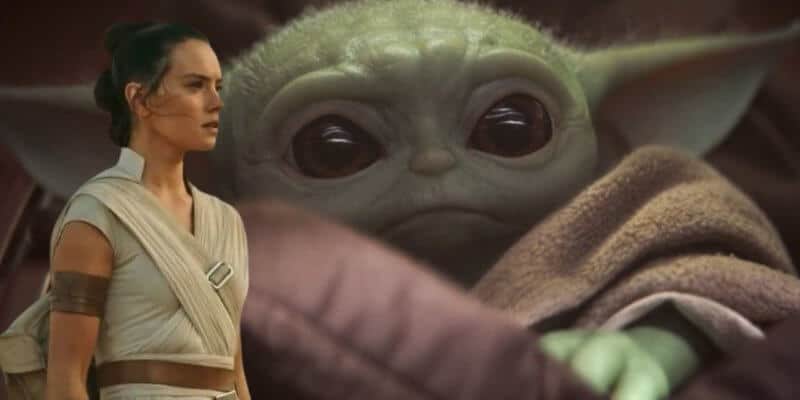 Speaking as someone who has only recently joined The Mandalorian fandom, I, like all of you, have had the joy of falling in love with Grogu (AKA The Child AKA Baby Yoda) for the first time. Even though the cute little puppet only has to slightly tilt his head or put something in his mouth to have audiences melt, Grogu seems to be one of the main driving forces behind The Mandalorian’s success. That being said, Disney is likely going to want to capitalize on our pal Grogu, and according to this Star Wars theory, it seems that Din Djarin’s (Pedro Pascal) foundling may tie into the Star Wars franchise in an even larger way.

**This article contains spoilers for multiple episodes of The Mandalorian! You’ve been warned, and if you would like to keep reading, then this is the way.**

Reddit user TheOrdinaryCritic took to the platform to discuss a fan theory that I have heard buzzing around a few Star Wars fan sites, and this one connects Grogu to Rey — as her grandfather. There are a few things to unpack here, but first off you should know that Rey (Daisy Ridley) starred in the Star Wars sequel trilogy — Episode VII: The Force Awakens (2015), Episode VIII: The Last Jedi (2017) and Episode IX: The Rise of Skywalker (2019).

Also, it is important to understand the Star Wars timeline. Decider explains it well — “The Mandalorian is set approximately five years after the end of Return of the Jedi, a.k.a. the final part of the Luke Skywalker trilogy; placing it (again, approximately) 25 years before the first Rey movie, The Force Awakens”.

Now that we know this — let’s take a look at the fan theory.

Inverse also got a hold of this theory and broke it down to a few sentences, as well as looked at all of the roadblocks that can prove this theory false, so let’s analyze this. The theory states:

Grogu’s midichlorians were injected into Palpatine clones being experimented on, resulting in the clone who went on to become Rey’s father. The genetics of Star Wars cloning are murky at best, but it does seem feasible that Grogu is, in a way, Rey’s grandfather.

Although midichlorians are a controversial topic within the Star Wars community, there is a known connection between midichlorian count and Force sensitivity. In the prequel trilogy, for example, Qui-Gon Jinn (Liam Neeson) notes that Anakin Skywalker’s (Hayden Christensen) midichlorian number is “over 20,000 — that’s more than Master Yoda!”

Since Grogu is the same species as Jedi Master Yoda, it serves to reason that he, too, would have an off-the-charts midichlorian count.

The fan theory asserts that having Grogu serve as the midichlorian donor for Dr. Pershing and Moff Gideon’s clones would allow the character to remain part of the Star Wars story for an extended period of time and connect him to Lucasfilm’s movie universe.

Inverse quickly pointed out a problem and solution to this theory. Remember the timeline we discussed?

Well, if The Mandalorian is set 25 years prior to Rey’s onscreen debut, we are dealing with a timeline that doesn’t make sense. From what we know, The Mandalorian takes place in 9 ABY, and Rey was born only 6 years later, in 15 ABY. For Grogu’s experimentation to begin only 6 years prior to Rey’s birth, it would seemingly not have been possible for the foundling’s midichlorians to enter her father, a failed Palpatine clone ahead of her birth.

There is a possible way around this plot hole — but it is certainly a stretch. Inverse noted, “in Attack of the Clones, clones on Kamino were said to have age acceleration, meaning they barely spent any time as children. If this was the same with Dr. Pershing’s cloning experiments, perhaps Rey’s dad was rejected for not being Force-sensitive when he was an adult and therefore able to father Rey only a handful of years later.”

Another issue is that in the second season of The Mandalorian (Chapter 12: The Siege), we discover that Grogu is likely being experimented on to create humanoids like Supreme Leader Snoke — and, perhaps, even Snoke himself. Although Snoke may have been the primary focus of Dr. Pershing’s experimentation, it is clear from the tanks of clones at the Imperial base that multiple lifeforms were being created simultaneously.

If this theory of Grogu’s midichlorians being used to create a number of clones — including Rey’s father — proves true, his connection to future Star Wars characters may be easier for filmmakers and showrunners to expound upon.

Do you think that Grogu is Rey’s Grandfather?