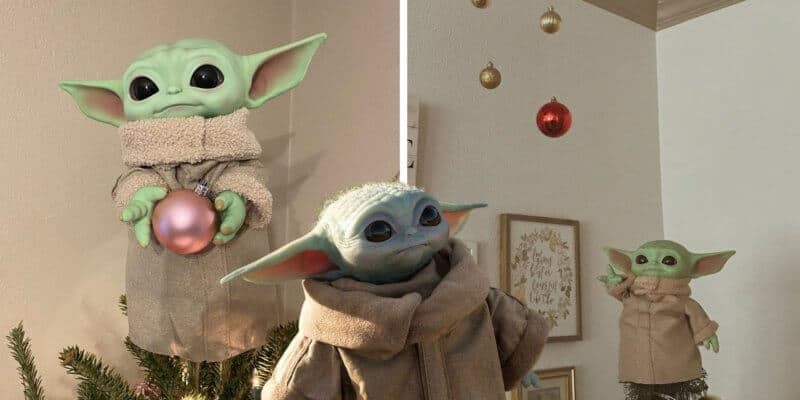 With the final episode of season 2 of The Mandalorian dropping on Disney+ this Friday, Star Wars fans have been deep inside the shows world this holiday season. More Mandalorian only means more Grogu (AKA The Child AKA Baby Yoda), and fans have come up with a new way to bring the kid into their lives.

Debatably, this is by far the most popular Star Wars character to ever come out of the franchise. Grogu/”Baby Yoda” merchandise is everywhere you turn, and then if you look away, it’s sold out in moments. The Mandalorian fans have been all over the green puppet’s apparel and especially, toy versions of him. There are some dolls that are so realistic-looking that you would think you purchased them from Jon Favreau and Dave Filoni themselves.

Fans are now using their Grogu AKA Baby Yoda toys to top their Christmas tree and scrapping the classic star or angel. And to be honest, this is everything we didn’t know we needed.

See below for a series of tweets that showcase cute little Grogu bringing everyone Christmas cheer on top of their trees! Plus, special shout out to anyone who gave him an ornament to play or use the Force with (or maybe eat, who knows?).

I LOVE IT, this is ours! pic.twitter.com/yYBOXFBa1r

Had a similar idea… pic.twitter.com/sW0szaZ99q

Nothing quite says Christmas like a Yoda tree topper! pic.twitter.com/dKMiIG3p08

And if the one who fans call “Baby Yoda” wasn’t enough of a Christmas present for you this year, Disney+ is gifting us all with one more glimpse into the Mandalorian world after the Season Two finale this week, until we need to wait for Season Three. Disney+ is releasing the Disney Gallery: The Mandalorian. Here, fans will be able to get a behind the scenes of the second season of The Mandalorian, taking deep dive into the popular Star Wars series.

Would you put a Grogu doll on the top of your Christmas tree this year?