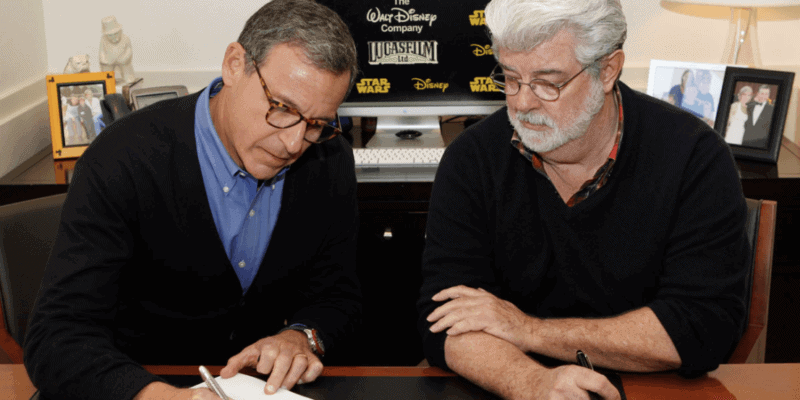 When Star Wars creator George Lucas released his first Star Wars movie, Star Wars: A New Hope (1977), nobody knew what the Star Wars franchise would become or that it would change the film industry forever.

Then, in 2012, Lucas and The Walt Disney Company shocked everyone when then-CEO Bob Iger announced that Disney was buying Lucasfilm, Ltd. in a $4 billion deal.

But, wait, how much has George Lucas actually made?

Although most Disney and Star Wars fans are well aware of the fact that Lucas made a cool $4 billion when he sold Lucasfilm, the actual amount the sci-fi guru has made is significantly more.

“George opted for a half cash/half stock deal. Technically, the deal was 55% cash/45% stock:

At the time the deal was closed, Disney was trading at $50 per share, so the “stock” portion was $1.85 billion. His 37 million shares represented a roughly 2.1% stake in the company…”

Their report continued, noting that Lucas’s interest in the company has only grown over the years (maybe it was worth the lack of involvement in the Star Wars sequel trilogy):

In years when Disney is paying dividends (which historically has been every year except 2020), as the owner of 37 million shares, George receives $32 million twice a year as a dividend payment. So in the years 2013 – 2019, George presumably received around $448 million in dividends.

Put it all together and you now understand why George’s net worth today is sitting at an all-time high of $10 billion.

So, although the Lucasfilm buyout was actually $4 billion, Disney’s stock price has increased so exponentially over the past nine years that Lucas has now earned $10 billion or more from the sale.

What’s next for Star Wars?

So far, Disney has expanded the Star Wars saga both onscreen and within its theme parks with Star Wars: Galaxy’s Edge at Disneyland Resort and Walt Disney World Resort.

Then, after the sequels divided Star Wars fans, Jon Favreau and Dave Filoni’s The Mandalorian brought them together again. The hit streaming series ushered in a new era of Star Wars and currently has three confirmed spinoffs in the works.

Ahsoka, Rangers of the New Republic, and The Book of Boba Fett will follow popular Star Wars characters like Ahsoka Tano (Rosario Dawson) and bounty hunter Boba Fett (Temuera Morrison). There are even rumors that animated Star Wars Rebels fan-favorite Hera Syndulla (voiced by Vanessa Marshall) could make her live-action debut in Rangers.

Furthermore, Disney+ will air at least 11 Star Wars series — including the four in the Mandalorian universe — over the next few years.

George Lucas himself even has writing credits on one upcoming show, Rogue One prequel Andor.

What do you think about how much George Lucas has ultimately made from selling Lucasfilm?