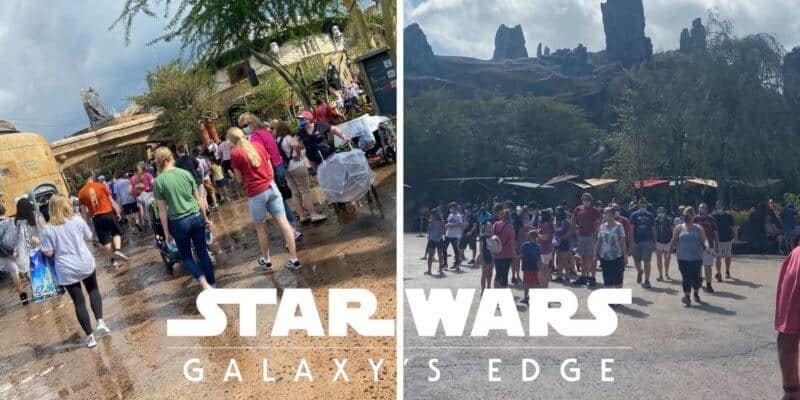 Walt Disney World brings in Guests from all around the world to the theme parks each and every year. With that being said, there are certain times when the theme parks are way more crowded than others. For example, the holiday season, spring break, and the summer months are way busier than in the middle of January or February.

I was recently visiting the Most Magical Place on Earth and noticed an increase in crowds compared to when I last visited a few weeks ago. This is more than likely due to the fact that spring break is here and many families are looking to spend time at Walt Disney World on their time off.

Well, with that being said, I wanted to look into just exactly how crowded some of the more popular places in the theme parks are because when these areas fill up with Guests, it can be overwhelming. So, let’s examine Star Wars: Galaxy’s Edge at Disney’s Hollywood Studios since Guests come from all over just to travel to a galaxy far, far away.

As you can see in the photo above, when I was visiting on March 2, there were Guests piled up outside of Star Wars: Rise of the Resistance. This is most likely due to people waiting for their boarding group to be called. This photo was taken at approximately 12 p.m.

Also at approximately 12 p.m., this is what the line for Rise of the Resistance looked like (see photo above). It extended to the entrance of Galaxy’s Edge, which seems to be typical on a day-to-day basis.

On the right-hand side, you can also see a crowd of people surrounding the area — again most likely waiting for their boarding group to be called.

As I continued deeper into Star Wars: Galaxy’s Edge, however, the crowds lessened (see the photo above). I was a bit surprised to see this as it was lunchtime and I expected Ronto Roasters to be a bit busy, but this wasn’t the case. Guests were socially distanced and relaxing as they took in the atmosphere of the land.

The walkway in the back that connects Rise of the Resistance and Ronto Roasters would sporadically have Guests coming through, but overall I found that this section of Galaxy’s Edge was pretty quiet. This was also around 12-12:30 p.m.

As the day continued, this section of the park became busier and busier. The section near where Chewbacca and Rey tend to come out and greet Guests from a safe distance was absolutely mobbed. It was hard to walk through as people were stopping randomly and blocking the pathway. I found that Guests were also not socially distancing in this section of the park.

We do want to note, that despite crowds pouring into the theme parks — Walt Disney World is still operating on a limited capacity due to the pandemic so these crowds are still not what they would be if they were operating at a full capacity level, or even operating at 50% capacity.

At 11:10 a.m. on March 2, the wait time for Millennium Falcon: Smugglers Run sat at about 65 minutes, which seemed to be pretty accurate. Because this is the only other attraction located in Galaxy’s Edge (aside from Rise of the Resistance, which Guests need a boarding group to ride) it isn’t a surprise that it was over an hour wait.

You can see in the screenshot above, however, that Tower of Terror and Slinky Dog Dash both have higher wait times, meaning that Guests are spread out throughout the theme park and not all hanging around Batuu.

So, How Busy is Galaxy’s Edge Really?

With all of this being said, it is safe to say that yes, Star Wars: Galaxy’s Edge is one of the most crowded parts of the theme park as it is the newest land and Star Wars has an enormous fan base, so everyone wants to get a taste of Batuu. However, with that being said, since Walt Disney World is still operating at a limited capacity of 35%, and the company has not announced plans to raise capacity yet, this part of the theme park is not nearly as busy as it was prior to the pandemic, in my opinion.

Additionally, when it comes to wait times, it is important to note that there are currently no FastPass+ options for Guests due restrictions in place at the theme parks during the pandemic.

All in all, I have found that certain times of the day (as well as certain days of the week) are busier than others. It seems these crowds come in spurts, so if you are experiencing some higher than expected crowds, I recommend going to a different part of the park and trying to come back later in the day.

Comments Off on Galaxy’s Edge Still Draws Crowds, But How Busy IS it?