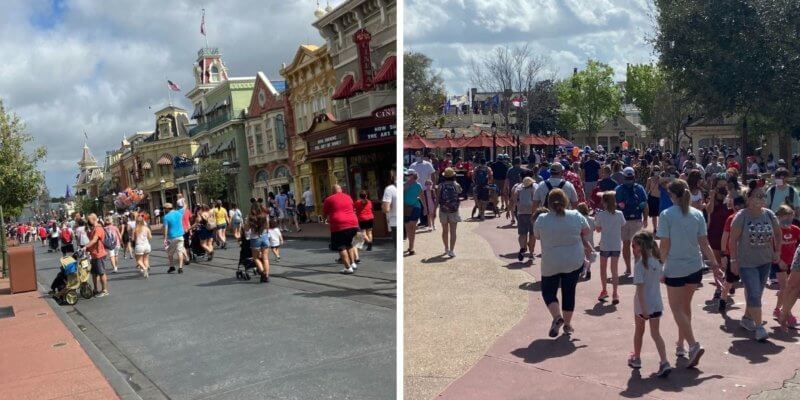 Walt Disney World is one of (if not the most) visited places in the world. Guests come from across the globe just to step foot on Main Street, U.S.A., and get a close-up view of Cinderella Castle in Magic Kingdom.

But with this being said, crowd levels can vary depending on time of year.

During the 2020 holiday season, crowds flocked to the theme parks, which hit their capacity limits on several days. However, shortly after the holidays came to an end, not as many Guests were visiting the parks as both crowd levels and wait times dramatically decreased.

Now, as we get further into 2021 and as we approach spring break, it looks as though more people are beginning to visit the theme parks again.

While at Disney World this week, I have noticed much higher crowd levels at the theme parks compared to when I was last at the Most Magical Place on Earth, which was in mid-January.

On March 1, 2021, I headed over to Magic Kingdom and arrived about an hour and a half after park opening. However, upon walking into the theme park, Guests were still seen piling into Main Street U.S.A.

When walking into Adventureland, the crowds died down a bit until I approached the area home to Jungle Cruise, Pirates of the Caribbean, and Aladdin’s Flying Carpets. Once here, it became clear that Guests were waiting in long lines to ride some of the more popular attractions in this area of the theme park.

I then headed to what is known to be one of the most crowded parts of the park every day — Fantasyland near Peter Pan’s Flight and “it’s a small world.” Much to my surprise, this area was not as crowded as expected.

However, one of the most crowded spots I saw while visiting was near Haunted Mansion. If you take a look at the photo below, you can see that there were a ton of people walking in various directions near the iconic Liberty Square attraction.

As I continued toward Splash Mountain and Big Thunder Mountain, the walkway that connects both Frontierland and Adventureland wasn’t as crowded either, which you can see in the photo below.

I found that even though the theme park was much more crowded on this recent trip compared to January, the level of crowds depends on where exactly you are at any given time within the theme park. For example, Main Street, U.S.A., is typically much busier all throughout the day compared to the walkway that connects Frontierland and Adventureland.

At this time, Walt Disney World is still operating at a limited capacity of 35%, and the company has not announced plans to raise capacity yet.