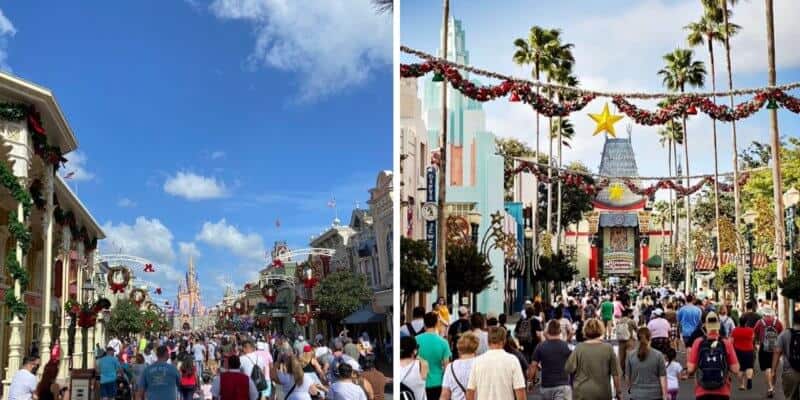 The magic of the holidays is always amazing, but it’s even better when you get to spend it at Disney World! With Christmas and festive offerings having begun as of November 6th, we have been paying attention to the crowd levels during the first weekend of holidays — and they were big.

Although Disney has not said that they have increased their capacity past the 25% they have previously state, the crowds do look larger and wait times for popular rides are climbing upwards of 80 minutes. It is important to remember that one of the reasons the wait times are higher is because many of the attractions are utilizing social distancing in the queues and ride vehicles, as well as frequent sanitization of the attraction, which slows the line down. However, large crowds on a holiday weekend is not so surprising, having seen the crazy crowds Halloween brought.

Let’s take a look at each day this past weekend at Disney World to see how the new Christmas and holiday festivities drew a larger crowd on each day, focusing primarily on Magic Kingdom as it is the Disney park with the most holiday offerings with an emphasis on Disney’s Hollywood Studios which is also beginning to look a lot like Christmas!

On Friday November 6th, Disney World began the holiday offerings at their theme parks! Inside the Magic was there to capture all of the Christmas cheer and as you can see below, we were not the only ones.

Although this does look quite crowded, we must remember that this was the first day Guests were able to be greeted by characters in their winter garb, or see the holiday cavalcades go down Main St. USA. It is also the entrance to the park which often bottle necks Guests creating a more crowded appearance.

It was the evening that really drew in huge crowds to Magic Kingdom on Friday as this was the first time Guests could see the Holiday projection show on Cinderella Castle. This overlay continuously changes and brings Guests holiday cheer. However if we look closely at the base of the castle, we can see many Guests were crowding the area to get a video, photo, and just watched the show.

Eliminating shows was a safety precaution taken by Disney World to make sure social distancing could be in effect at all times, and seeing the large crowd gather below is a reminder to that. Hopefully as time passes, the crowding in front of Cinderella Castle in the evenings at Magic Kingdom settles down.

We can get an even closer look at the evening crowds thanks to Denise at Mousesteps who posted a video of Main St. flooded with people amid the joyful Christmas and holiday decorations. This is likely what happens when you put what is 25% capacity of Guests, all in the same place at once.

On Saturday, we woke up to large crowds once again at Magic Kingdom. LuvWDW took to Twitter to state:

Absolutely no way the Magic Kingdom is operating at only 25%! Very crowded and claustrophobic today

As we previously mentioned, Disney has not announced that capacity has been raised as of yet, but it seems that the morning rush of Disney Park Pass reservation Guests was very strong.

Absolutely no way the Magic Kingdom is operating at only 25%! Very crowded and claustrophobic today ? pic.twitter.com/hudWcgIlbS

That being said, social distancing in lines was definitely still happening! As you can see, the Pirates of the Carribbean queue is very distanced, and we can tell that Guests are listening to the rules and making sure they stay 6 feet away from the party ahead of them.

Additionally, once 3:30 pm rolled around in Adventureland, crowd levels appeared to have significantly decreased from what they were in the morning on Main St. For the most part we can see crowds here are distanced.

That being said, at the same time, the queue for Pirates of the Caribbean had a very long wait at 70 minutes. We can also see other attractions such as Peter Pan’s Flight and Big Thunder Mountain climb to high wait times as high as 80 minutes. It is likely that the reason crowds seem to die down during the afternoon at Magic Kingdom, may be because Guests are in line waiting for an attraction.

And by 4:00 pm, the Hub and Cinderella Castle area was no longer crowded. We can see Guests very distanced and walking with ease around the most photogenic area of Magic Kingdom. Seeing this, if you want to visit the parks on a weekend, coming later in the day seems like a definite trick to beating the crowd — all you have to do it be late to it!

It seems that Disney’s Hollywood Studios was also very busy on Saturday. If we follow along Guest Brian Baker’s journey to the park on Twitter, we can see that Brian has to wait in quite the long line to ride the Skyliner over Hollywood Studios.

Once he arrived, the line to do temperature check seemed to look just as long as the Disney Skyliner line from Caribbean Beach Resort.

They started processing the temperature screening queue at 9:10 AM. pic.twitter.com/xWMHLAzzrt

He also arrived for park open at DHS, which we can see boasted a large crowd as Guests entered the park. Unfortunately, the bottle neck walkway we have on Main St. poses the same problem that we see on Hollywood Boulevard.

It seems that attraction wait times were also very long with the popular attraction Mickey & Minnie’s Runaway Railway having an 85 minute wait, and Star Wars: Galaxy’s Edge attraction Millennium Falcon: Smugglers Run trailing behind with a 55 minute wait. Even Muppet*Vision 3-D, which typically is a walk on, has a 30 minute wait.

In terms of which weekend day should Guests visit during the holidays at Disney World to experience the smallest crowds, it seems Sunday may be your best bet!

Lyreitza Michelle Tweeted that Sunday was a, “perfect day” for her Magic Kingdom visit and who could blame her?! The small crowds in front of Cinderella Castle have us feeling like this is going to be a socially distant day at Disney!

Elise also Tweeted a photo of the entry way to Adventureland, which is also looking quite barren. If we take a look at the photos from Saturday at Adventureland, there is a lot more foot traffic going on, so it seems Sunday’s crowds may have dissipated.

Although the daytime crowds at Magic Kingdom looked manageable and small, it seems the evening crowd definitely grew to watch the holiday overlay on Cinderella Castle. If we check out Tarmalys’s Instagram shot below, we can see hoards of people gathering in the hub of Magic Kingdom to watch the projection show on the castle.

That being said, this crowd below is still nothing in comparison to any viewing of Happily Ever After.

Inside the Magic’s Senior Editor Kelly Coffey was at Disney’s Hollywood Studios on this day, and it seemed like the crowds here were much better on Sunday as well. While sitting at Baseline Taphouse, Kelly noticed that crowds would show up in spurts. At times it would be busier, and then fully empty, as you can see below. These photos were taken just a few minutes apart!

It also seemed that crowds in Toy Story Land were apparent, but nothing to really worry about, since there was still room to distantly walk around other Guests.

So, When Should You Visit?

Overall, it seems that although capacity is still reduced at Walt Disney World due to the ongoing pandemic, large crowds were still flocking to the theme parks to catch a glimpse of Christmas at Disney for the first official weekend of the holiday season.

Weekend crowds are always busier, so if you are planning to go to Disney soon, heading on a weekday during the middle of the day is your best bet to having a socially distanced trip to Magic Kingdom, or any other Disney Park you may be headed to. However, if you must head to the parks on a weekend, we suggest heading on Sundays, as that seems to be the lesser crowded option from the information we have gathered so far.

If you want to spend the holidays at Disney World, you still can! Click here and start booking your next Disney vacation and spend Christmas with Mickey Mouse this year!

Will you be at Disney World this holiday season?