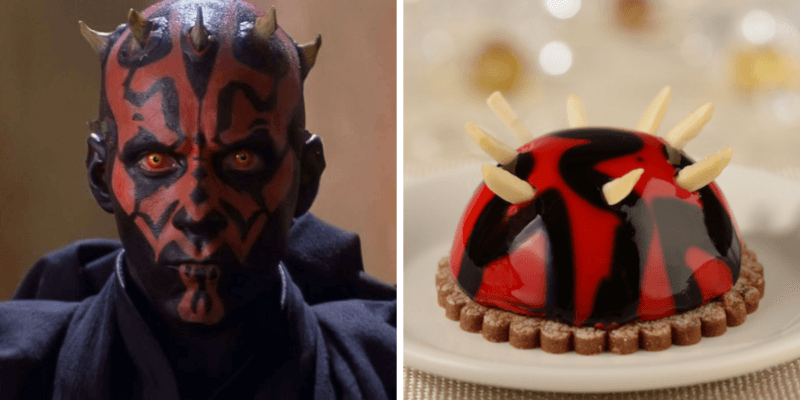 Every Star Wars fan’s favorite day of the year is almost here! May the Fourth is quickly approaching and Disney World has just released their list of delicious treats you can get to celebrate the holiday. Walt Disney World’s Best Bites has released a complete list of all the new snacks coming to their theme parks, but here we will focus solely on the Star Wars snacks.

Even if you’re not a Star Wars fan, you can still indulge in these limited-time offerings.

Amorette’s will be offering a miniature dome cake that looks just like adorable Baby Yoda, the breakout star of the Disney+ series, The Mandalorian. Okay, so his real name might be Grogu, and some call him The Child, but to so many people, he will always be known as Baby Yoda.

This adorable little dome cake is a vanilla cake filled with cookies and cream mousse.

The Ganachery at Disney Springs

This delicious Disney Springs store is known for its array of mouthwatering chocolate desserts. For Disney’s Star Wars celebration, The Ganachery has created a beautiful chocolate pop that is a miniature replica of the Millennium Falcon. This chocolate lollipop also comes with crispy pearls and has edible silver dust to add to the Falcon design.

Disney’s Hollywood Studios park will be the main hub for celebrating all things Star Wars. That makes complete sense since Hollywood Studios is where Walt Disney World’s newest land, Star Wars: Galaxy’s Edge, is located. There are a ton of great snacks that Guests can purchase on not only May 4 but also May 5.

One of the most popular snacks throughout Disney Parks is the deliciously hot and sugary churro. To celebrate Star Wars Day, the Anaheim Produce churro cart will be selling lightsaber churros. Guests will have the choice between a red lightsaber or a blue lightsaber and each will come with a chocolate dipping sauce.

Epic Eats is an Indiana Jones-themed snack stop at the park where Guests can purchase a variety of funnel cakes, as well as soft-serve ice cream. You can even order a funnel cake topped with ice cream! For the Star Wars celebratory days, this snack location will be selling a Galactic Swirl funnel cake. This limited-time funnel cake is a black and white funnel cake covered in space dust, candy rocks, and strawberries.

This restaurant is the main quick-service location found in Star Wars: Galaxy’s Edge. They are definitely one of the most delicious restaurants in the galaxy! At this location, Guests will be able to indulge in the Oi-Oi Puff, a raspberry cream puff with a passion fruit mousse.

This sweet treat contains not only popcorn but also candied, spiced nuts, and chocolate cookie pieces. It can be found at the Hyperion, Animation, and Hollywood popcorn snack carts.

This dessert is eerily similar to the Star Wars villain who people love (or love to hate), Darth Maul. This dome cake is made of a malted milk chocolate dome cake and is filled with raspberry mousse and studded with almonds. It is served on top of a shortbread cookie.

The creepy dessert can be found at The Trolley Car Café, PizzeRizzo, and the Backlot Express.

For the 21+ adult crowd, don’t worry, Disney has not forgotten you! They are offering a delicious Cosmic Rum Punch that sounds out-of-this-world. The Cosmic Rum Punch is made with coconut rum, rum, pineapple juice, lemonade, and grenadine. It is also served with a reusable glow cube.

This drink can be found at Oasis Canteen, the Hollywood Brown Derby Lounge, and the Sunshine Day Bar.

The Jettison Juice is made for Star Wars fans young and old. This refreshing drink is basically watermelon lemonade, which is a perfect complement to a hot day at the theme parks. This drink is also served with a reusable glow cube.

The Darth Vader stein is one intimidating cup that will make a great souvenir! Both the drink and the stein can be found at Backlot Express, ABC Commissary, PizzeRizzo, and Rosie’s All-American Café.

It should be noted, that PizzeRizzo will only offer the Darth Vader stein on May 4. The other park locations listed above will continue to offer it on May 5.

We hope you find this snack guide helpful for your Disney World Star Wars celebration. Happy eating and May the Fourth be with you!

Which of these Star Wars snacks are you looking forward to the most? Let us know in the comments!