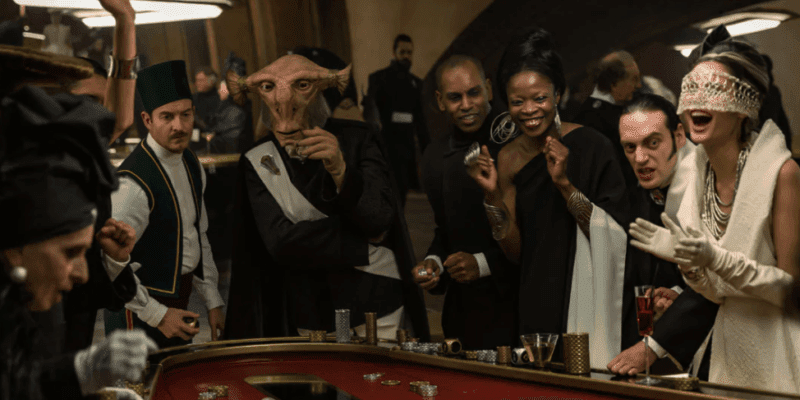 Ever since plans for the Star Wars: Galactic Starcruiser hotel were announced at the 2017 D23 Expo in Anaheim, California, Star Wars fans have been anxiously awaiting any news about the immersive Disney Resort project. The Star Wars hotel promises to be unlike anything Disney Park fans have ever experienced before.

Although the COVID-19 pandemic derailed construction plans for some time, work is now continuing on the Galactic Starcruiser project at Disney’s Hollywood Studios at Walt Disney World Resort in Orlando, Florida. In fact, it appears that the Star Wars Resort is nearing completion — Star Wars fans have even gotten a sneak peek at a stateroom onboard the Halycon, courtesy of Walt Disney World President Jeff Vahle and Parks, Experiences and Products Chairman Josh D’Amaro!

Now, thanks to the newly released The Art of Star Wars: Galaxy’s Edge coffee table book, Disney has confirmed a brand new experience for Starcruiser Guests to look forward to.

Guests who want to maximize their immersion in the Star Wars story of Galaxy’s Edge need look no further than Star Wars: Galactic Starcruiser. Coming to Walt Disney World Resort, Galactic Starcruiser will take guests on an adventure like non other — one that “travels” into space to put guests on an elegant starship in the Chandrila Star Line fleet, the Halcyon. An overnight experience shaped around standard cruise offerings — a lounge, a dinner show, tours of the ship — Galactic Starcruiser goes above and beyond by extending an invitation to participate more actively in the narrative — whether accepting a mission from the Resistance or the First Order, training with a lightsaber, or kicking back in the lounge. Each guest sets his or her own level of participation, and their choices impact the story around them.

While we knew about the existence of the Silver C Lounge — which the book also confirms will have a Sabacc table — and the lightsaber training experience, this is the first time Disney Imagineers have shared details about the dinner show that will be available onboard the Halcyon luxury starship.

In the imagery of the show [pictured above], it appears that Guests will be seated at tables surrounding a sleek stage where performers will either stand or be projected. From this concept art, it is unclear if holograms will be used to project Star Wars species, such as Twi’leks, onto the stage, or if Cast Members will wear elaborate costumes taken straight out of a galaxy far, far away.

The Art of Star Wars: Galaxy’s Edge also notes these details about the design of the Starcruiser, which will contrast with the feel of Disney’s Star Wars land, Batuu:

While we can’t guarantee a cameo by Mark Hamill (like there was in the actual Canto Bight casino in the sequel trilogy), it sounds like Halcyon passengers are in for a truly unforgettable experience. Walt Disney Company CEO Bob Chapek has promised that Guests will be “blown away” by the Starcruiser.

And, if the dinner show concept art is anything to go off of, you’d better bring your dancing shoes and a high-class getup for this intergalactic version of the Copacabana in its heyday.

Are you excited to book passage on the Halcyon star liner?

Disney has not confirmed the opening date for the Star Wars: Galatic Starcruiser hotel at Disney World. For the latest details, visit the Star Wars Resort’s official webpage. And, if you want to visit Disney World or Disneyland — where the new Star Wars Trading Post can be found at Downtown Disney — contact the expert team at Academy Travel to help you plan every magical detail.