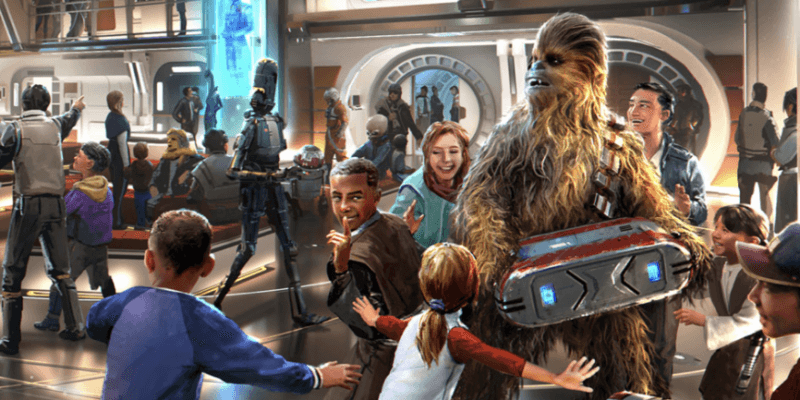 “People are going to be blown away by the experience. It is truly unlike anything we have ever done before”

Although Star Wars fans have been anxiously awaiting an official opening date for the Halcyon — the name of the starship that passengers will board when they enter the Galactic Starcruiser — Disney officials have been giving occasional sneak peek glimpses at what Guests can expect when the incredibly immersive experience is finally available.

For example, photos of nearly completed staterooms onboard the luxury starship have been unveiled. Although fans had mixed opinions regarding the reveal, it is certainly exciting to imagine setting foot on the Halcyon and “blasting off” into a galaxy far, far away.

On February 7, Twitter user Bioreconstruct shared up-to-date photos of progress on the Star Wars Galactic Starcruiser Resort. In these aerial photos, it is easy to see that the Halcyon is taking shape and the outside of the structure is truly beginning to resemble a ship straight out of the Star Wars universe!

The first-of-its-kind hotel will function as an extension of the Star Wars: Galaxy’s Edge land at Disney’s Hollywood Studios Park. Guests who choose to book passage on the Halcyon starship will get to experience a port excursion on the Outer Rim planet of Batuu and will even get to ride both Millennium Falcon Smuggler’s Run and Star Wars: Rise of the Resistance.

At this time, the Star Wars hotel is still slated for a 2021 opening, but Disney has not confirmed an official date. Disney’s description of the Galactic Starcruiser hotel reads:

The Galactic Starcruiser was originally announced as part of Disney‘s Star Wars land at the 2017 D23 Expo in Anaheim, California.

Are you planning to take an intergalactic adventure when Starcruiser reservations open up?

Let the experts at Academy Travel help you plan every magical details of your next Walt Disney World Resort vacation! In addition to the upcoming Star Wars hotel, Disney World Guests can look forward to many EPCOT projects, such as Remy’s Ratatouille Adventure and the Guardians of the Galaxy: Cosmic Rewind roller coaster.