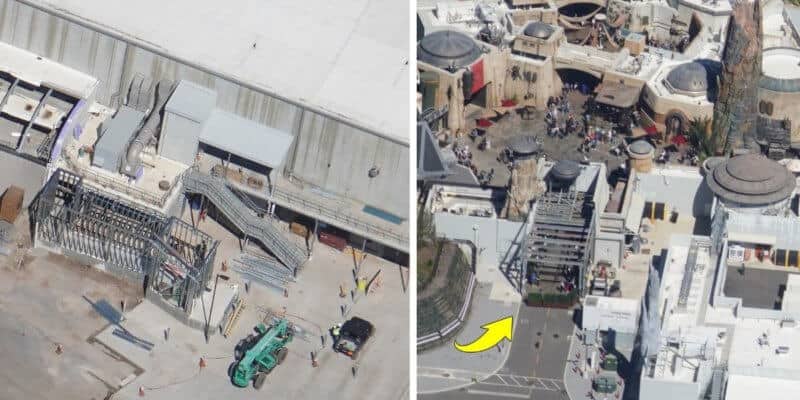 The Disney Imagineering team’s main goal with Star Wars: Galaxy’s Edge was to help Guests experience their own Star Wars stories. Now, with the Galactic Starcruiser hotel, the Halcyon will continue to keep that goal progressing forward.

The Galactic Starcruiser hotel will allow Guests to fully immerse themselves in Star Wars during a preset storyline during a 2-night, 3-day narrative. With staterooms nearly completed, many Disney and Star Wars fans are excited to see what this immersive experience will look like.

One thing that is guaranteed with your stay aboard the Halcyon is that the pre-planned storyline will include a “port excursion” to Batuu — it’s like cruising in a galaxy far, far away. During the stop, Guests will be able to explore Star Wars: Galaxy’s Edge at Disney’s Hollywood Studios and ride the land’s two attractions, Star Wars: Rise of the Resistance and Millennium Falcon Smugglers Run.

But how will Guests get to Batuu?

It seems likely that a shuttle of some sort will need to transport Guests to the Disney Park because the Starcruiser is not actually part of the 14-acre Galaxy’s Edge expansion. Considering the staterooms are going to be using screens as windows for Guests to keep the immersion alive, a bus can likely be transformed to do the same thing. That being said, Disney has yet to showcase the design of the shuttles that will likely transport Guests.

Now, Biorecontruct (@Bioreconstruct) has shared multiple aerial photos of where Guests may board their shuttles at the Star Wars Galactic Starcruiser hotel, as well as where the shuttles could dock in Batuu. Bioreconstruct shared some speculation:

Aerial look at where guests will access shuttle ships for excursions between Batuu and the Star Wars Galactic Starcruiser (hotel). Immersive vehicles with the illusion of space travel.

Immersive shuttle ships will carry guests on excursions from Star Wars Galactic Starcruiser and Batuu. Will the shuttles dock in this area? Really, the shuttles will be buses. With video screen windows showing the flight between ground and space.

Immersive shuttle ships will carry guests on excursions from Star Wars Galactic Starcruiser and Batuu. Will the shuttles dock in this area?

Really, the shuttles will be buses. With video screen windows showing the flight between ground and space. pic.twitter.com/DD14slynrj

At the moment, the Walt Disney World Resort website is showing that the Galactic Starcruiser Hotel will be ready in 2021. However, with Disney we have seen time and time again that dates often move around. Stay tuned to Inside the Magic for the latest Galactic Starcruiser details.

Are you excited for the Disney to open the Galactic Starcruiser Hotel? When do you think it will open?

Do you want to be the first to stay in the Galactic Starcruiser Hotel? If so, it is important to start planning your Orlando vacation ahead of time to get the perfect Disney Resort! With Disney Park Pass reservations always moving fast, having the experts at Academy Travel in your corner is essential to ensuring you have a magical visit. You can look into all the fun you and your party can have at Magic Kingdom, Disney’s Hollywood Studios, EPCOT, Animal Kingdom, and even plan a night at Disney Springs! Click here to begin planning your visit to Cinderella Castle to meet Mickey Mouse and Minnie Mouse today!