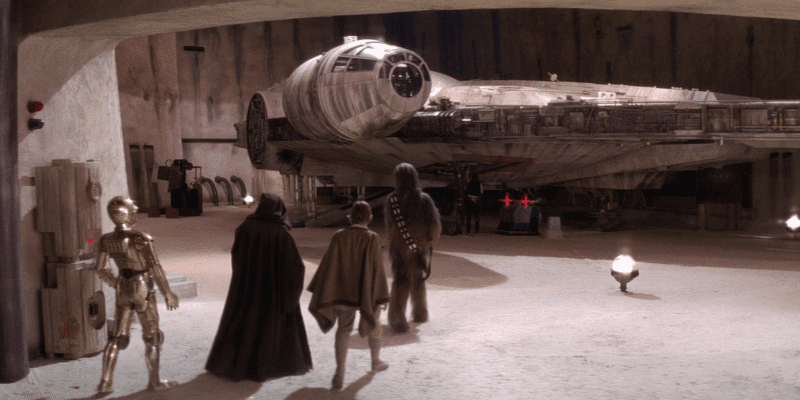 The Star Wars franchise is one of the most iconic in all of cinema. And, the Millennium Falcon is undeniably its most iconic starship. But did you know that George Lucas actually wanted it to look like a flying hamburger?

The Falcon has a checkered past — almost as checkered as its original owner, Lando Calrissian’s, in fact — but, ultimately, always ends up on the side of the good guys (also a lot like Lando, come to think of it).

Ever since the Corellian light freighter made its debut in Star Wars: A New Hope, it’s unique design has become synonymous with the Star Wars galaxy — and with Han Solo, its most well-known pilot.

But, the item that inspired the design of the famous Star Wars space vessel probably isn’t what you’re expecting. According to a Mental Floss Star Wars trivia article:

The original concept model of the Millennium Falcon was long and cylindrical—very unlike the flat design we know now. The model makers complained the design was too similar to the spacecraft from the 1970s British TV series Space: 1999, so Lucas told them to create something completely different that looked like a flying hamburger and sailed like a sunfish.

A variation of the Falcon prototype did, however, end up in the movie. It’s the Rebel Blockade Runner seen fleeing the Imperial Star Destroyer in the opening scene.

So, in short, the most famous ship in a galaxy far, far away is a flying hamburger. Try to get that out of your head next time you watch Chewbacca (Peter Mayhew), Solo (Harrison Ford), Princess Leia (Carrie Fisher), and Jedi Knight Luke Skywalker (Mark Hamill) make a daring escape in the original trilogy.

At this time, it’s unclear when the Falcon will show up next in the Star Wars universe, but there’s a good chance we’ll see the YT-1300f freighter in Lando, the upcoming Disney+ special event series about Lando Calrissian.

It is currently unclear if original actor, Billy Dee Williams, or Solo: A Star Wars Story (2018) actor, Donald Glover, will be featured in the show. There is also a chance that both actors could reprise their roles, with older Lando (Williams) sharing tales about his youth, flashing back to young Lando (Glover).

If you visit Disney’s Hollywood Studios at Walt Disney World Resort in Orlando, Florida or Disneyland Park at Disneyland Resort in Anaheim, California, you can fly the Millennium Falcon for yourself!

Each of these parks’ Star Wars: Galaxy’s Edge lands feature a 100-foot-long replica of the Millennium Falcon — and it sits outside of an attraction that allows Disney Parks Guests to sit in the Falcon’s cockpit and take control of a mission to collect coaxium.

What do you think about this fun Millennium Falcon trivia? Will you always see a flying hamburger from now on?