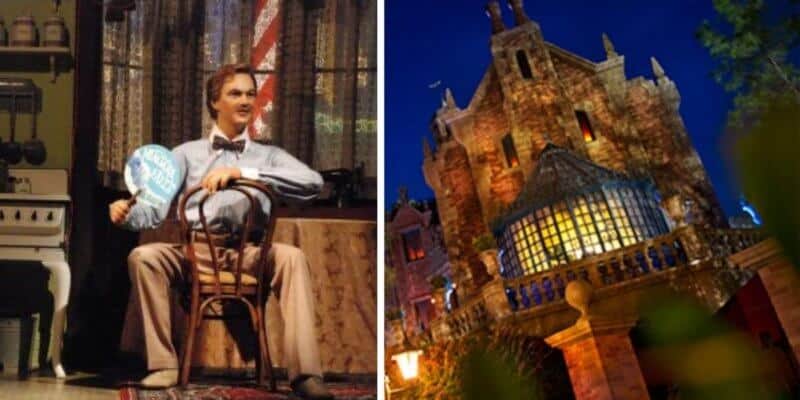 If you are a fan of Haunted Mansion and Walt Disney’s Carousel of Progress at Disney World, this theory is about to blow your mind.

If you have been on Walt Disney’s Carousel of Progress, of course, you know we follow the American family through the 20th century, but also, we get to see more than just the classic nuclear family of John (dad), Sarah (mom), Jim (brother), Patty (sister).

There is a grandmother, grandfather, and uncle that all appear throughout the ride as well. And the grandmother specifically has some funny moments in the show, especially when she is hiding her love of boxing from her husband.

When Guests see the grandmother listening to music in one scene, we can see she is rocking back and forth on a rocking chair, which is identical to what one of the characters does in Haunted Mansion.

Thanks to The Mouselets (@themouselets) on TikTok, we can see a side-by-side comparison of both characters, and I have to say — it looks identical.

In the Haunted Mansion scene, we can see another elderly lady rocking in her chair, just as the grandmother does in Carousel of Progress, and down to the hairstyle, the two look identical.

So, when I saw this video I thought… can this make sense? Well, let’s see.

Ok, we have that timeline sorted, but what about Haunted Mansion? For this theory to be true, we need to be able to place Grandma Progress in Haunted Mansion at some point after 2000, in terms of the storyline.

So, let’s first find out the era in which Haunted Mansion takes place. Intitally, many may just assume it is older due to a lot of the Victorian era touches that are detailed throughout, but, as we saw in the 2003 live-action film, it seems that time is really irrelevant at Haunted Mansion because, for every new Guest, time technically freezes for them — Speaking in terms of what Guests know about the world once they die.

So, it seems that our grandmother in Carousel of Progress could very well be the old lady rocking in Haunted Mansion! And if it was, this would not be Disney’s first time connecting characters through attractions, as we have seen in the past through Disney’s Secret Society of Explorers and Adventurers. That being said, this is just a theory and has not been confirmed by Disney.

Do you think that the grandmother in Carousel of Progress could be the old lady in Haunted Mansion?