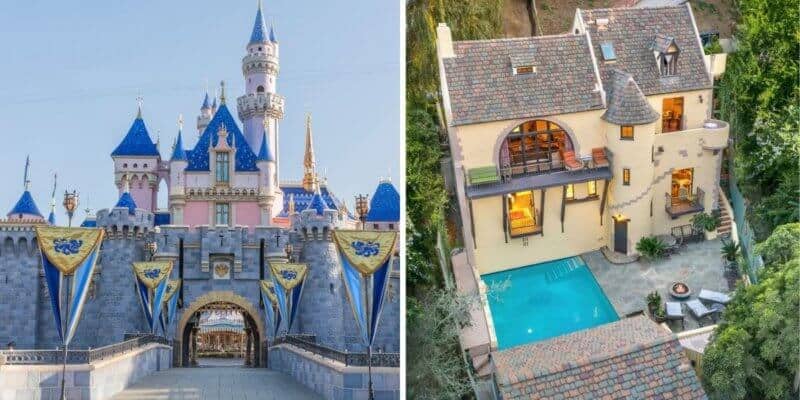 If you are someone who dreams of living inside of Sleeping Beauty Castle in Disneyland, we have the next best thing available!

In 1926 Roland E. Hill, the architect for Sleeping Beauty Castle at Disneyland, built a home. The home was designed to have a storybook feel to it and has now changed owners twice.

Although the modernizing of some elements of the home have taken place, the majority of the house remains as it was once designed by Hill.

The description alone makes me feel like I am entering a royal Snow White cabin.

The property — which sits on a tenth of an acre — also entails a separate studio, a guest house, and a two-car garage. The home also comes with five citrus trees, a fountain, a slate patio, a fire pit, and wrought-iron gates.

The New York Post explained how Hill and Disney met:

He drew his castle inspirations from his stint as a pilot in World War I, when, after he was injured in a crash, he chauffeured officers around France and Germany, sketching many of the castles he saw along the way, according to the bio his grandson, Steven Edward Hill, wrote for his official IMDb profile. In the Army, Hill met Walt Disney, when he also was a driver in France for the American Red Cross. They formed a friendship over the drawings, and Neuschwanstein Castle in Germany became the inspiration for his later work. His family mantra: “Anything worth dreaming in life is worth working for.”

After Hill returned from art school, he advised on castle and medieval architecture design for Disney such as films like Snow White and the Seven Dwarfs, Fantasia, and Sleeping Beauty. This was all done two years before Hill would go on to also design the $2.5 million house that is currently for sale.

Over in Disney World, homes in Golden Oak which is an on-property housing complex where million-dollar homes have been flying off the market — an Annual Passholder dream!

Of course, one of Hill’s next designs a few years later in 1955 was Sleeping Beauty Castle at Disneyland Resort in California — creating the first-ever Disney park castle to stand.

So if you want to live in a storybook home designed by the man who created Disneyland’s Castle, all you have to do is click here, and agree to be in debt for the rest of your life! All I know if that I sure would like to watch Disney+ here!

Unfortunately for the buyer, although the house will be from the same architect as Sleeping Beauty Castle, that Disneyland castle will not be visible for a while. Due to the coronavirus pandemic, Disneyland Resort (including Disneyland and Disney California Adventure) continues to remain closed. Downtown Disney, however, is currently available for Guests. If you want to be sure that you can see a Disney castle, heading to Walt Disney World Resort in Orlando is your best bet!

What do you think of the house? Do you think it is worth $2.5 million?