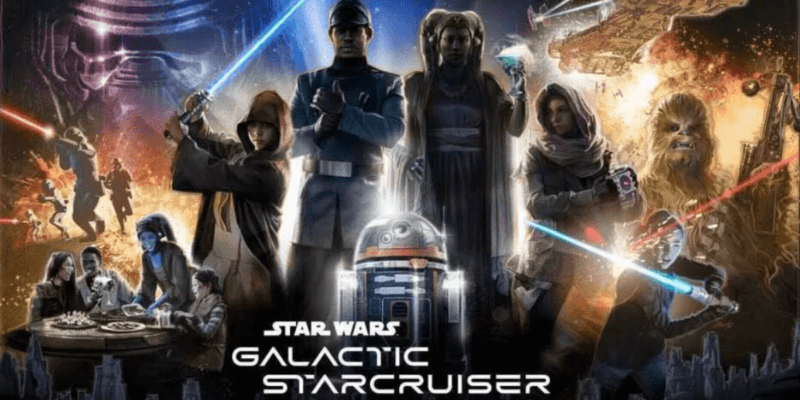 2021 is the year for a massive turnaround for everyone, including Disney. It’s almost time for the Walt Disney World’s 50th Anniversary Celebration, and with a flurry of news surrounding upcoming attractions and experiences, Disney finally released the poster for Star Wars: Galactic Cruiser, their most anticipated attraction since Star Wars: Rise of the Resistance.

In the words of Orson Krennic, “Oh, it’s beautiful.” Disney Parks fans and Star Wars fans have eagerly waited for the ribbon-on-top sneak-peek into the Star Wars: Galactic Cruiser, and it’s finally here.

In the poster above, you’ll see the groundbreaking immersive experiences awaiting Guests who’ll be boarding the Galactic Cruiser for an unforgettable, Star Wars-filled two-night experience at the Walt Disney World Resort.

According to the Disney Parks Blog,

There are four people at the center of the poster – a youngling wearing Jedi robes and wielding a lightsaber, an adult dressed in the uniform of a First Order officer, a Twi’lek adult, and another youngling who appears to be holding a piece of technology of some sort. These figures are meant to represent you, the travelers, because Star Wars: Galactic Starcruiser is about your choices and how you live your personal Star Wars stories. Do you want to support the First Order? Live like a Jedi in training? Or perhaps become a member of high galactic society? It’s all waiting there for you to discover and decide.

This fantastic poster features the Halcyon starship, the official starcruiser that sets sail next year with every kind of Star Wars character and creature imaginable on it. From Chewbacca to Stormtroopers and Imperial Guards, Guests aboard the luxurious passenger starship will have the chance to make their mark on the galaxy with an endless array of interactive experiences and storytelling adventures.

Through revolutionary ride technology, Guests will feel like their actually zooming through the galaxy when they enter a Launch Pod that will “blast off into space and rendezvous with the Halcyon,” according to Disney.

The image in the lower right is something I’m incredibly excited for – lightsaber training! That’s right, as part of your experience, you’ll face off with a training remote similar to how Luke Skywalker once did and learn the lightsaber’s ancient ways.

Looming above all this is the intimidating visage of Kylo Ren. Couple him with those First Order stormtroopers charging into the scene on the left-hand side and … I have a bad feeling about this. The Halcyon starcruiser does have a storied past, after all, and a reputation for finding itself in the middle of galactic conflicts. Luckily Chewbacca and his trusty bowcaster are there in the upper-right corner. Remember, it’s not wise to upset a Wookiee!

Related: Want to Work on the Galactic Starcruiser? Disney Is Hiring!

Taking leaps further from Star Wars: Galaxy’s Edge, Walt Disney Imagineering is breaking through every wall of interactivity and Guest interactions in this first-of-its-kind hotel experience. Star Wars fans will have every dream come true.

From training with Luke Skywalker in the ways of the Force to smuggling goods behind the First Order’s back, the Star Wars: Galactic Cruiser will be a groundbreaking addition to the Walt Disney World Resort.

Opening in 2022, the Star Wars: Galactic Cruiser will invite Guests into a new world of “storytelling” as you travel across the Star Wars universe in a galactic starship.

Will you stay at the Star Wars: Galactic Cruiser? Let us know in the comments below!