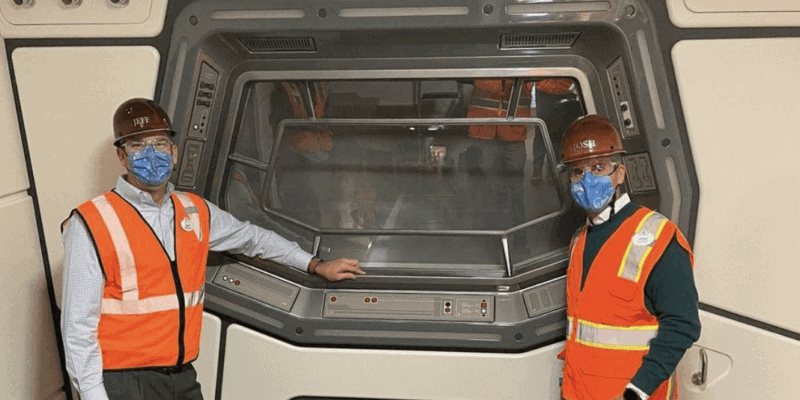 The Star Wars: Galactic Starcruiser promises to be an experience like none other. Walt Disney Company CEO Bob Chapek has said the upcoming Walt Disney World Resort Star Wars hotel will leave Guests “blown away” with just how immersive it is.

Related: Want to Work on the Galactic Starcruiser? Disney Is Hiring!

The Halcyon luxury starship will be home to a number of high-end spaces, including dining experiences like the Crown of Corellia — which pays homage to Han Solo’s home planet where both the Halcyon and the Millennium Falcon were constructed — and a dinner show featuring performers from the Star Wars universe.

Just like a real cruise, passengers onboard the Galactic Starcruiser will get to experience a port excursion. In this case, they will be transported to Batuu at Star Wars: Galaxy’s Edge on special vehicles that won’t break immersion.

While on Batuu, Guests will be able to shop at Black Spire Outpost and ride both Star Wars land attractions — Star Wars: Rise of the Resistance and Millennium Falcon: Smugglers Run.

It is likely that these rides, particularly the First Order’s presence on Rise of the Resistance, will play a role in the overall storyline of the Starcruiser experience. Now, one Imagineer has hinted that Guests’ choices during their Star Wars-themed vacations could lead them to take “detours” to other familiar planets, too.

“And just like any other cruise, we have an itinerary. So we have a set list of planets that we will visit. It’s possible that we might take a detour or two if we find ourselves in unexpected circumstances. But you will be able to see those planets, other ships, maybe the occasional asteroid field, out the window as we cruise from place to place. On board we have a whole host of characters who are joining us on our adventure, and that’s everything from the crew of the ship to a few folks that you might recognize from the movies, and they’ll need our help over the course of our adventure.” Who might those movie characters be? “I can tell you that it’s possible we might run into Rey, Chewbacca, and if we play our cards wrong, Kylo Ren.”

While Johnson didn’t specifically say which planets Guests might experience as onboard “detours”, presumably through the starship’s viewports, it’s likely that it will be well-known locations like Tatooine, Corellia, Coruscant, and the Forest Moon of Endor (all made famous in Star Wars movies).

A crash landing on Endor — maybe even complete with an Ewok sighting — would be incredibly fun for Guests.

One of the coolest things we know for sure about this new Star Wars Resort is that Guests’ choices will play a huge role in their overall experience. This means that you could book passage on the Halcyon over and over and never have the same trip twice.

Until the new Walt Dinsey World Resort hotel officially opens in 2022, we’ll just have to imagine what these newly announced “unexpected circumstances” and “detours” could be!

The Galactic Starcruiser hotel will be located at Walt Disney World Resort’s Disney’s Hollywood Studios Park, where Star Wars: Galaxy’s Edge can be found. The Starcruiser project was first announced at the 2017 D23 Expo in Anaheim, California.

Are you looking forward to the Starcruiser experience? Which planets do you hope Imagineering included out the windows?

Let the expert team at Academy Travel help you plan every magical detail of your next Disney Park vacation, whether you want to spend time drinking intergalactic beverages at Oga’s Cantina or ogling Cinderella Castle!