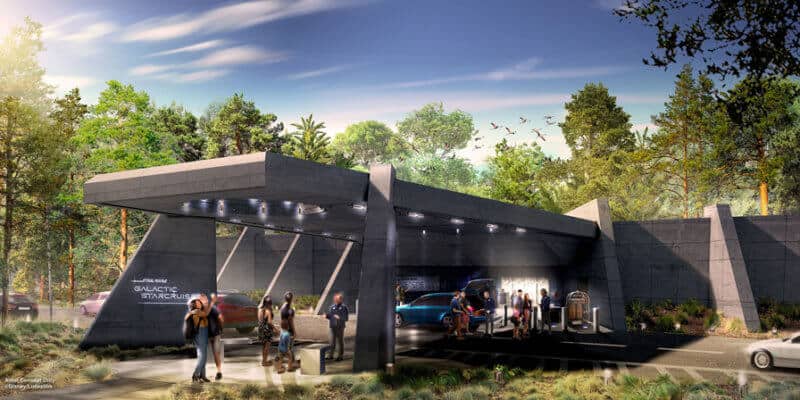 When the Star Wars: Galactic Starcruiser hotel was first announced by The Walt Disney Company at the 2017 D23 Expo in Anaheim, California, Star Wars fans were ecstatic. The fully immersive Walt Disney World Resort experience will allow Guests to truly feel as though they are traveling through a galaxy far, far away for the very first time, well and truly putting them in the center of the Star Wars story.

During Disney World’s COVID-19 related closure last year, work on the Resort was halted — it now officially has a 2022 opening date — but, Twitter user Bioreconstruct has shared the latest images of progress on the Galactic Starcruiser construction site!

One photo, in particular, gives Disney World fans a first look at the inside of the waiting area where Guests will stay while they are waiting for their port excursion to Batuu at Star Wars: Galaxy’s Edge at Disney’s Hollywood Studios Park. Bioreconstruct wrote:

Star Wars Galactic Starcruiser hotel will have shuttles flown by drone for excursions to Batuu. It seems like a look inside the spaceship’s waiting room is at left. These shuttles will actually be buses with video windows showing flight. Shuttles docking at doorway at right.

Star Wars Galactic Starcruiser hotel will have shuttles flown by drone for excursions to Batuu. It seems like a look inside the spaceship's waiting room is at left. These shuttles will actually be buses with video windows showing flight. Shuttles docking at doorway at right. pic.twitter.com/5MwshVjRr7

Bioreconstruct also shared new images of the terminal where Halcyon passengers will arrive and depart from Batuu. It’s easy to see how the immersive experience will operate, as it appears Guests will not see any part of Hollywood Studios outside of the shuttle “jetway” and Galaxy’s Edge itself:

Aerial photos of construction of the shuttle terminal where Star Wars Galactic Starcruiser guests will arrive and depart Batuu.

Aerial photos of construction of the shuttle terminal where Star Wars Galactic Starcruiser guests will arrive and depart Batuu. pic.twitter.com/fY7T17fIxH

Although we can’t fully see the waiting area, it is obvious that small groups of people will be visiting Batuu at any given time. It appears that there will be an overhead light fixture (the large white object) and, possibly, benches or chairs installed for Guests to sit on while they wait for their “space shuttles” to arrive.

We don’t yet fully know how the Star Wars hotel will operate from a storyline standpoint, although Walt Disney Imagineers have made clear that Guests’ choices will impact what happens to them onboard.

However, regardless of how much Guests choose to participate in the Star Wars story on the Halcyon luxury starliner, everyone will visit Black Spire Outpost — and have the ability to ride Star Wars: Rise of the Resistance and Millennium Falcon – Smugglers Run — at some point during the two-night Star Wars hotel experience.

In addition to meeting characters like Rey, Kylo Ren, and Chewbacca from the Star Wars universe, Galactic Starcruiser Guests will be able to take part in a lightsaber activity, wielding one of the iconic Star Wars weapons for themselves.

Furthermore, there will be at least three dining experiences — the Crown of Corellia dining room, a Star Wars-themed dinner show, and the all-ages The Sublight Lounge (formerly known as The Silver C Lounge).

What do you think about this latest look at the Halcyon Starcruiser’s layout? Are you looking forward to Disney’s first Star Wars Resort hotel?

Let the expert team at Academy Travel help you plan your next magical vacation to all of Walt Disney World Resort’s four theme parks — Magic Kingdom, EPCOT, Disney’s Animal Kingdom, and Disney’s Hollywood Studios. They can also help you visit Disneyland Resort in California or plan a trip to any Disney property worldwide!