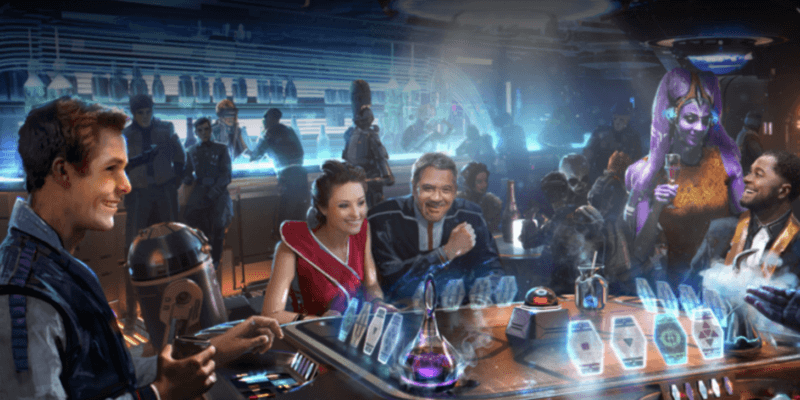 If you’re like most Star Wars fans, you’ve been not-so-patiently waiting for details about Walt Disney World Resort’s Star Wars: Galactic Starcruiser hotel since it was first announced at the 2017 D23 Expo in Anaheim, California.

After months without much inside information, Disney has finally started revealing more specific details about what Guests can expect when they board the Halcyon luxury starliner. First, we got an official launch year — 2022.

Then, Disney gave a glimpse of one of the onboard dining experiences — the Crown of Corellia will celebrate Han Solo’s home planet, known for the shipyards where both the Halcyon and the Millennium Falcon were crafted.

Now, one Walt Disney Imagineer has shared just how immersive this three-night/two-day excursion to a galaxy far, far away is going to be. Let’s just say you might find yourself mingling with some Guests who are dressed in out-of-this-world attire.

The makers of Star Wars: Galactic Starcruiser want fans to be active participants. “We are encouraging our guests to be in full cosplay,” she says. “So if you want to have Twi’lek lekku and a full robe, we are all for it aboard the Halcyon. And then we will treat you like the well-heeled galactic traveler that you are.” And you will be traveling in style.

But, don’t fret if you’re not a Star Wars superfan. Disney’s Star Wars Resort will still be fun for those who have never bothered to watch a single original trilogy movie. Walt Disney Imagineering’s Johnson said:

“I deeply believe that this has to be fun for people who love Star Wars and the people who love them,” she says. “So if you have never heard of Chewbacca before, or you’ve never heard of a lightsaber before, our goal is that you still have a great time. If you want to sit back, drink a space cocktail, and watch it all happen, that’s awesome. Have a fantastic space cruise.”

Passengers on the Starcruiser will get to take a port excursion to Batuu, where they will experience Black Spire Outpost, Star Wars: Rise of the Resistance, and Millennium Falcon – Smugglers Run (and maybe have a run-in with Kylo Ren and the First Order, depending on the decisions they make during their intergalactic adventure!)

Are you looking forward to the Star Wars hotel? Do you plan to wear an elaborate Star Wars costume when you board?

Let the expert team at Academy Travel help you plan every magical detail of your next Disney Park vacation!