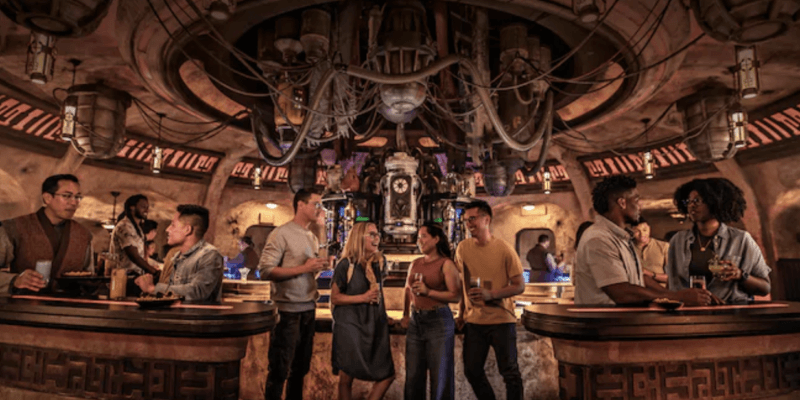 Now, Guests don’t have to wait long to book passage on the Halcyon, the luxury Corellian starliner that will “transport” passengers to a galaxy far, far away — reservations open on October 28, 2021 and the first journey begins on March 1, 2022.

Disney World’s first Star Wars hotel is also the Florida theme park’s first all-inclusive onsite Resort hotel. But, as it turns out, not quite everything is included in the cost of a pricey Halcyon stateroom.

The official Galactic Starcruiser website notes that there are four popular “Add-On Activities” that are not included in the cost of a Star Wars hotel vacation package — dining at Oga’s Cantina, building a lightsaber at Savi’s Handbuilt Lightsabers, constructing an Astromech droid at the Droid Depot, and booking a seat at the Captain’s Table on board the ship.

It is worth noting that Guests’ Starcruiser packages will include one-day tickets to Disney’s Hollywood Studios Park, and passengers will get to experience a port excursion to Batuu’s Black Spire Outpost at Star Wars: Galaxy’s Edge. Rides on both Star Wars: Rise of the Resistance and Millennium Falcon: Smugglers Run are also included.

While we know certain details about the Galactic Starcruiser experience — such as the fact that sequel trilogy characters like Chewbacca, Rey, and Kylo Ren will all be on board and Guests will be able to choose how much they immerse themselves in the experience (feel free to dress like a Twi’lek if you choose!) — many parts of this new addition to the Star Wars story remain under wraps.

Rest assured, though, that Imagineers and Disney CEO Bob Chapek are certain their most ambitious endeavor to date will leave Guests “blown away.”

Oga’s Cantina is officially described as:

The Droid Depot is officially described as:

Visit a workshop stocked with parts, chips, manuals and other tech items useful for constructing your very own droid, one of the galaxy’s most indispensable sidekicks.

More on the Captain’s Table

The Captain’s Table is officially described as:

Arrange to sit at the captain’s table for an especially memorable dinner experience. Enjoy extra courses—the captain’s favorite dishes—while seated in a prime location in the center of the Crown of Corellia Dining Room.

An additional fee is required for Captain’s Table seating.

The website notes that Guests need to contact a Galactic Starcruiser Specialist to book any of the “Add-On Activitites” available to Starcruiser passengers.

Are you planning to take a journey on the Halcyon?