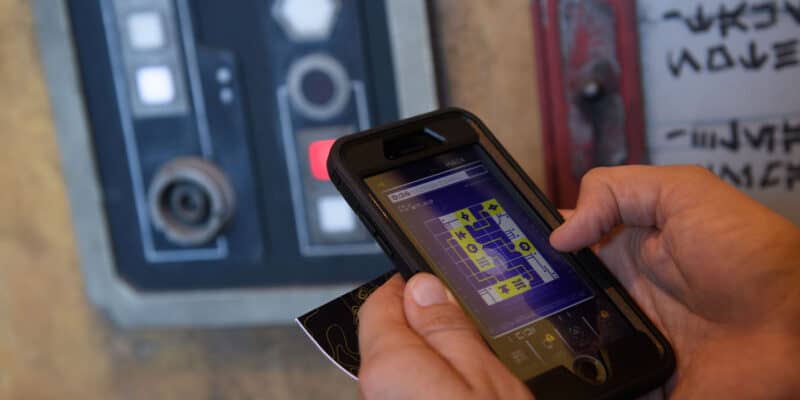 In recent years, The Walt Disney Company has been regularly improving its technology to make the Disney Parks Guest experience even better than it previously was.

For example, the Disneyland app received major updates during Disneyland Resort’s COVID-19 shutdown, the My Disney Experience app is soon to debut the Disney Genie portal, and Disney recently announced the innovative, interactive MagicBand+ line that will hit Walt Disney World Resort in 2022.

Now, Disney has confirmed another technology-related update that is especially exciting for Star Wars fans. During the media day event for Walt Disney World Resort’s 50th anniversary celebration, Ann Morrow Johnson [above], Executive Producer and Creative Director for Star Wars: Galactic Starcruiser, shared details about how Guests on the Halcyon starship will engage with the overall Star Wars hotel experience:

“If you want to sit back and watch, and kind of watch the action unfold, that’s awesome. If you’re the type of person who wants to get dressed up but maybe not play so hard and be in full face paint and costume but then kind of watch the action, that’s awesome. On the other hand, if you want to come as you but you want to find absolutely every detail and play hard to help the First Order or Resistance or Smuggler…that’s awesome too. There’s the Datapad, which is the Play Disney Parks app, which our Guests will also get to kind of see new pieces of the story unfold that connect through there, as well. So there are a variety of different ways that Guests can engage with this entirely new Star Wars story and of course it’s got lots of little Easter eggs for those who may know a little more.”

While Morrow Johnson didn’t provide full details about this new Play Disney Parks expansion, it is sure to further enhance an experience that both Imagineers and Walt Disney Company CEO Bob Chapek have described as the most immersive story they’ve ever attempted to create.

While we know certain details about the Galactic Starcruiser experience — such as the fact that sequel trilogy characters like Chewbacca, Rey, and Kylo Ren will all be on board and Guests will take a port excursion to Batuu’s Black Spire Outpost at Star Wars: Galaxy’s Edge — many details about this first-of-its-kind Walt Disney World Resort hotel remain under wraps.

Now, though, for the first time, Morrow Johnson has given a new hint about how passengers on the Corellian ship will be able to fully experience everything that the Starcruiser has to offer.

Reservations for the Halcyon open on October 28, 2021. Its first “voyage” is slated for March 1, 2022. Visit the official Star Wars: Galactic Starcruiser website for the latest details.

Turn wait time into play time with Play Disney Parks, a mobile app that connects family and friends to the theme parks with unique experiences and activities that bring surrounding environments to life. The more you explore, the more there is to discover—download the new app through the App Store and on Google Play!

A Disneyland Resort version of the app is also available.

Are you looking forward to this Star Wars-centric Play Disney Parks app update?