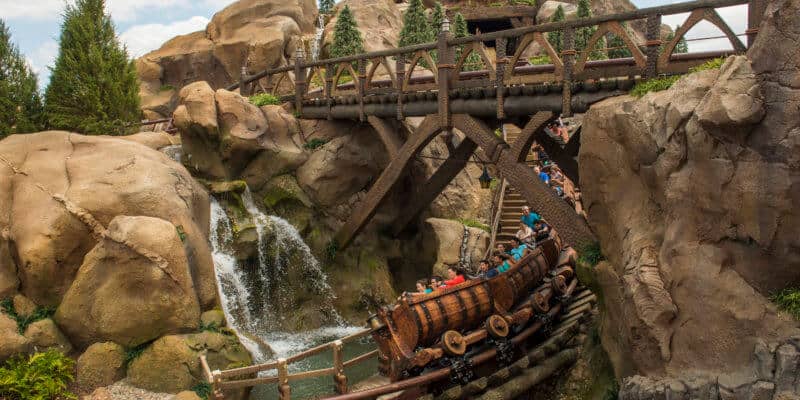 Disney Genie+ and Lightning Lanes — a paid “FastPass”-style system, similar in some ways to the paid Disney Premier Access program at both Shanghai Disneyland and Disneyland Paris — will be accessible via the new Disney Genie Service in both the Disneyland app and Disney World’s My Disney Experience app.

The system will offer two different ways to skip tradtional Disney World and Disneyland standby lines for select rides and attractions — the aforementioned Lightning Lane system, which Guests will pay $15 per day for, and the Genie+ system, which will allow Guests to choose high-demand rides, such as Magic Kingdom’s Seven Dwarfs Mine Train roller coaster, using a paid a la carte process.

One of the biggest changes for Walt Disney World Resort Guests is that Lightning Lane reservations will no longer be able to be made in advance of your vacation. Instead, Disney Parks on both U.S. coasts are moving to a same-day reservation system, much like how Disneyland Resort’s MaxPass offering used to function, prior to the pandemic. (Both FastPass/FastPass+ at Disney World and FASTPASS/MaxPass at Disneyland have been suspended since the theme parks reopened.)

Related: Could ‘Guardians’ Coaster Have a Virtual Queue When It Opens?

In a D23 interview, Disney Parks, Experiences and Products Chairman Josh D’Amaro explained why this decision was made. He was asked:

“In the before-time, guests at Walt Disney World could book their Fast Passes in advance while guests at Disneyland would book through Max Pass or get a FASTPASS on the day the go to the park. How did the team decide to stick with day-of planning for both resorts?”

The Disney executive responded with the following, highlighting the fact that the Genie system is designed to provide a more efficient, simplified experience for Guests at both Disney Parks in the United States:

“What our guests were telling us was that they wanted more simplicity and spontaneity. They wanted it to be a more convenient tool for them. We’ve done that with the Genie suite of products, so you don’t need to be scrambling and worried. Let the tool do the work for you. And then, show up and enjoy yourself. It’s that idea of simplicity that we love at Disney, and it’s what our fans told us they want. So this applies perfectly to Walt Disney World.”

Disney also confirmed that the new Disney Genie+ system will have special perks for Guests who are staying at onsite Disney Resort hotels. These theme park Guests will be able to make their a la carte Lightning Lane reservations earlier than others.

Beginning at 7 a.m. local time, everyone heading to a Disney theme park for that day can reserve their Disney Genie+ selections.

Regular Guests — those who are not staying a Disney Resort hotel — have to wait until they enter the theme park before they make their additional a la carte Lightning Lane selections that are not automatically included in Disney Genie+, such as the aforementioned Seven Dwarfs Mine Train at Magic Kingdom, Radiator Springs Racers at Disney California Adventure, Star Wars: Rise of the Resistance, and other highly popular attractions. These in-demand attractions are an additional fee per ride, on top of the cost of Disney Genie+.

However, Guests staying on property in a Disney Resort hotel will have the added benefit of being able to make their a la carte Lightning Lane selections at 7 a.m., too. So, if you are staying at a Disney Resort, you will be able to make your Lightning Lane selections for both Disney Genie+ and the additional a la carte options (for those highly coveted rides) at the same time each morning of your trip.

An exact drop date for the Disney Genie Service has not been unveiled, but it will be sometime this fall according to Disney Parks Blog.

What do you think about the new Lightning Lane system at Disney Parks?