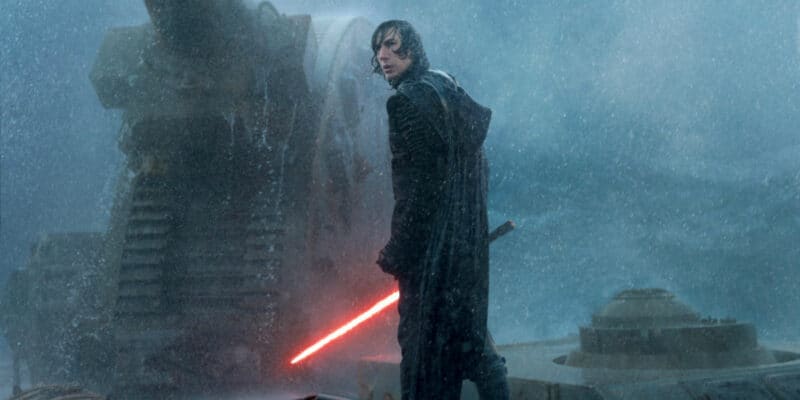 In the Star Wars universe, some characters are more divisive than others.

Ren — born Ben Solo, Han and Leia’s son — is a fan-favorite for some Star Wars aficionados, while others wish the character had never been created in the first place.

What almost everyone can agree on, though, is that Ren’s origin story was murky at best in the sequel trilogy, a trio of films just as divisive as the villain-turned-hero himself.

In Star Wars: Episode VII – The Force Awakens (2015), JJ Abrams and his team hinted at a complex fall from the light side to the dark side via a Forceback experienced by Rey (Daisy Ridley). In her visions of Ren’s past, Rey saw what appeared to be the Knights of Ren destroying Jedi Master Luke Skywalker’s (Mark Hamill) new Jedi Temple, with Kylo Ren himself at the helm.

Then, in Rian Johnson’s Star Wars: Episode VIII – The Last Jedi (2017), the story shifted, and filmmakers indicated that Luke Skywalker had always known about his nephew’s potentially dark fate, but had been so blinded by love for his twin sister’s son that he ignored the warning signs.

Per TLJ, on the night Rey witnessed, Skywalker entered young Ben Solo’s room at the Jedi Academy and, upon sensing the darkness growing in him, instinctively turned on his lightsaber — an act he later came to deeply regret. When Solo awoke, he was convinced his uncle was trying to murder him, thus burning the Temple to the ground in rage.

Later, prior to the release of the Skywalker Saga finale, Star Wars: Episode IX – The Rise of Skywalker (2019), Lucasfilm made yet more changes to Ren’s backstory. In prolific Star Wars writer Charles Soule’s comic miniseries The Rise of Kylo Ren, for example, Ren never actually made a conscious choice to turn to the dark side.

This comic revealed Palpatine [Emperor Sheev Palpatine (Ian McDiarmid)] had manipulated Ben Solo throughout his life, and hinted that it had been Palpatine’s presence Luke sensed when he stood in his nephew’s room. What’s more, the Jedi Temple had not been destroyed by Ben Solo at all; with Luke Skywalker defeated by his own nephew, Palpatine launched a Force Storm upon the Temple and razed it to the ground.

Now, in the new non-canon LEGO Star Wars Terrifying Tales Halloween special, Lucasfilm has given Kylo Ren another origin story — and it is actually more appealing than anything in the existing Star Wars canon.

As Darth Vader’s servant and acolyte Vaneé tells it, Ben Solo was a powerful Force user who disliked Jedi Order teachings and who never felt he fit in among the religion’s devotees, largely due to his vanity and pride. After a chance encounter with the Knights of Ren and their leader, Ren himself, Kylo chose to leave the Jedi willingly and embrace the tenets of the Knights of Ren — namely that one should take whatever one wanted from the galaxy, consequences be darned.

Although this isn’t the actual origin story that exists for Kylo Ren in the sequel trilogy, it’s an intriguing look at what could have been. Furthermore, with Ren seemingly playing an increasingly important role in the Star Wars story, there’s no reason we couldn’t see this story — or at least parts of it — become canon at some point in time as the Star Wars franchise continues to expand.

Not to mention, the further we can get from Supreme Leader Snoke, the better…

Which Kylo Ren origin story do you like best?