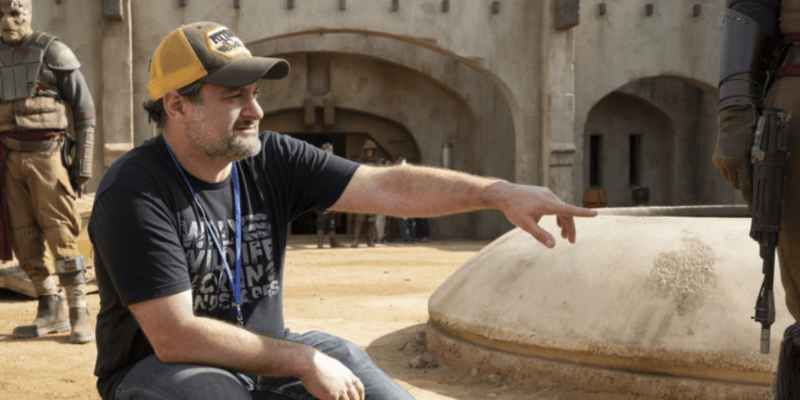 The Star Wars sequel trilogy had some plot holes, at best. At worst, it completely ruined the Star Wars universe George Lucas spent decades upon decades of his life building. No matter which Star Wars fan camp you fall into, we can all agree upon the fact that Supreme Leader Snoke was far from the best villain the Star Wars franchise has ever seen.

Snoke didn’t really serve many purposes throughout Episode VII – The Force Awakens (2015), Episode VIII – The Last Jedi (2017), and the conclusion of the Skywalker Saga, Episode IX – The Rise of Skywalker (2019).

His origin story was never fully explained and his primary purpose for existing seemed to be to allow Kylo Ren (Adam Driver) to ultimately take over as Supreme Leader — he was, essentially, a placeholder for the former Ben Solo without a real story of his own.

During The Mandalorian Season 2, showrunner Jon Favreau and Dave Filoni already started explaining Snoke’s origin better than the Star Wars sequels ever did when they introduced Dr. Pershing (Omid Abtahi) and his clone experiments for Moff Gideon (Giancarlo Esposito).

Now, Filoni is picking up where he left off in his latest Star Wars animated series, Star Wars: The Bad Batch.

The Bad Batch began right where Star Wars: The Clone Wars ended in the Star Wars timeline. In Episode 1, “The Aftermath”, we found ourselves in the middle of the fray during the execution of Palpatine’s execution of Order 66, watching a confused Clone Force 99 — Hunter, Wrecker, Tech, Echo, and Crosshair — try to understand why all of the clone troopers around them just turned on the Jedi Generals they had served for years.

The culprit, of course, was the clones’ inhibitor chips, which had been implanted on Kamino. Omega, a female clone who plays into the theory we’ll dive into in just a moment, joined the ranks of Clone Force 99 when Crosshair left to become an Imperial officer.

A former medical ward worker on Kamino, she has also helped the “defective” clones understand exactly how the inhibitor chips work.

Now, one Star Wars fan has theorized that the Kaminoans might be even more closely tied to Snoke, The Mandalorian‘s Dr. Pershing’s experiments on Grogu, and even Rey (Daisy Ridley) than we ever knew:

I theorize Kaminoans figured out how to clone Force sensitive users with Omega and because Tarkin will completely stop the clones, Kaminoans will refuse to give the info on how to clone force sensitive users to the empire. Somehow, the Empire will find out by Omega most likely. And then Palpatine will send Vader to retrieve the info. Kaminoans will refuse and Vader will kill them all basically erradicating the entire Kaminoan species. This is why we only see “human” Kaminoans in Mando.

Though it seems unlikely that Darth Vader will ultimately appear in The Bad Batch, the rest of this theory does seem to hold water, particularly when one realizes that we haven’t ever seen a native Kaminoan in the Star Wars chronology after The Bad Batch is set.

One particularly intriguing notion that this idea gives rise to is the fact that Omega could actually be the perfect Force-sensitive clone — not Force-sensitive, but disfigured, like Snoke, or attractive, but “useless,” like Rey’s father.

Inverse also had thoughts about this new theory, noting:

…there’s one way Lama Su and Nala Se, both Kaminoans, might have moved to save themselves from the Empire’s wrath…the Kaminoans could have worked a fail-safe into the same inhibitor chips, bringing the clones on Kamino to their aid during an attack.

They continued, astutely pointing out:

This theory is convincing, if only through its sheer effectiveness. Palpatine had the Kaminoans working on clone technology for years, so it’s hard to believe they never developed the tech he wanted most (the ability to create a perfect, Force-sensitive clone).

Now, as Mandalorian creator Jon Favreau and executive producer Dave Filoni continue to expand their Star Wars story on Disney+ with The Mandalorian Season 3, starring bounty hunter Din Djarin (Pedro Pascal), and its trio of spinoffs — Ahsoka, Rangers of the New Republic, and The Book of Boba Fett — the galaxy is rife with possibilities for the talented duo to finally erase and explain some of the sequel trilogy’s problems once and for all.

The next wave of Favreau and Filoni’s Star Wars series are expected to introduce a number of Expanded Universe characters into the existing Star Wars canon. Star Wars Legends fan-favorites Grand Admiral Thrawn and Mara Jade Skywalker are both presumed to be making their live-action debuts soon, for example.

What do you think? Is Omega actually a Force-sensitive clone who isn’t horribly disfigured?

You can catch both seasons of The Mandalorian and new episodes of The Bad Batch every Friday on Disney+. Star Wars: The Clone Wars, Star Wars Rebels, and Star Wars Resistance — which follows the adventures of Poe Dameron and more — are also available on Disney’s streaming platform.